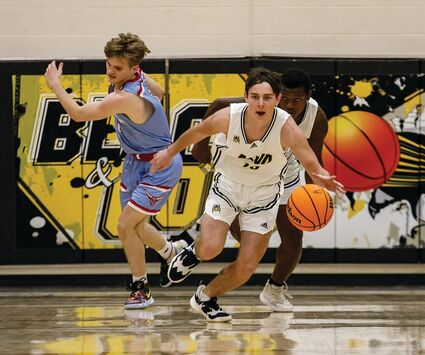 Goldbug Jordan Lohmann (10) breaks away and runs down court in hopes for two points.

The Alva Goldbugs began the season with a 56-39 win over Chisholm at home Tuesday night. The Goldbug lineup includes plenty of seasoned players from last year. Their starting five included one junior and four seniors. Except for early in the first period, Alva led in scoring and steadily increased the margin as the game progressed.

Goldbug Phillip Randall is sidelined, recovering from a football injury, but he's expected to recover soon.

Daylon Malone stole the ball from Chisholm and passed it to Kyler Penco who scored. Langley Aman answered with a three-pointer to give the Longhorns their only lead at 3-2. Drake Wharton sank a three-pointer from the right front circle. Aman was fouled and made one of two shots. Weston Tucker fed his rebound to Lantz Mathers who scored a basket for Alva. Penco went to the charity stripe, making one of two chances. Alva now led 8-4.

Huston Lane scored on a deep three-pointer for Chisholm to narrow the Alva lead to one. Penco scored and was fouled. His free throw put Alva up 11-7. Aman made a Longhorn basket. Tucker went in for an Alva layup, and the quarter ended with Alva leading 13-9.

Penco led off the second period with a basket and a bonus shot after. Penco went to the rim again and was fouled. He made one of two shots, and Alva led 17-9. Alex Keefer put two points on the board for the Longhorns and was fouled. He added a free throw. Aiden Ruiz added two points for the Goldbugs on a Malone assist. Penco went in to for a left-handed layup. Alva now led 21-12. Keefer scored a basket. Alva answered with baskets from Penco and Malone to put Alva up 25-14.

Keefer scored for the Longhorns. Ruiz grabbed an offensive rebound and scored for Alva. Lane narrowed the Goldbug lead with two free throws followed by a trey from the corner. Alva now led 27-21. Penco drove to the rim for two points and was fouled, making the third bonus point. Before time ran out, Penco made another trip to the rim to score. The Goldbugs led 32-21 at the halftime break.

The Longhorns had a five-point run to open the third quarter before the Goldbugs could score. Allen Weber made one of two free throws. Then Weber was fouled again and missed that shot. Aman hit a high arcing three-pointer. Keefer followed with one point from a free throw.

Finally Tucker banked a shot off the glass to score for Alva. Penco added two on a Drew Glass assist, and Alva led 36-26. Longhorn Kellen Epps was fouled, making one of two changes. Penco scored on a right wing three, and Ruiz added two on an offensive rebound to extend Alva's lead to 41-27. Epps went down with an ankle injury and hobbled to the bench. Chisholm junior Camden Daniels scored from three-point range. Ruiz finished out the quarter with an Alva basket. At the end of three quarters, Alva led 43-30. 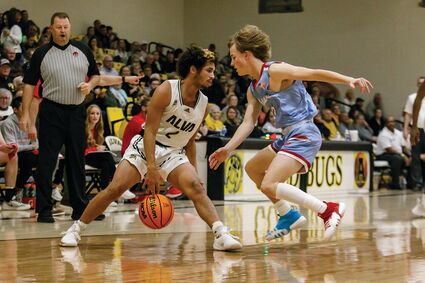 Goldbug Daylon Malone (2) uses his skills to get around the Longhorn defense.

The Goldbugs began the final period with a lay-in from Tucker off the glass and a basket from Malone. Tucker scored again on an offensive rebound and was fouled. He made the extra point, and Alva led 50-30. Lane and Weber managed one free throw each for the Longhorns. Then Penco went to the charity stripe, making both free throws for Alva. Aman scored a Chisholm basket, but Keefer fell hard and went to the bench.

Penco went to the foul line and added two points for Alva. Malone scored a Goldbug basket. Aman went for a three-point shot at the buzzer and made it. The final was Alva 56, Chisholm 39.

Penco led the Goldbugs in scoring with 38 points followed by Tucker with nine, Ruiz eight and Malone six. Wharton had three and Mathers two.

Chisholm scoring was led by Aman with 15 followed by Lane with nine and Keefer eight. Weber and Daniels each had one, and Epps made one free throw.

Next up, the Goldbugs will host the Newkirk Tigers tonight (Dec. 2) following the Ladybug game.