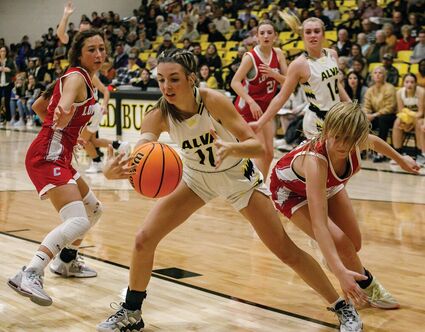 Alva Junior Triniti Miller (11) saves the ball from going out of bounds.

Despite having only one senior on the team, the Alva Ladybugs opened their season at home with a 37-31 win over the Chisholm Lady Longhorns. Although they have a new coach in Aly Seng, the Lady Longhorns are heavy on seniors this year. That wasn't enough of an edge as the youthful Ladybugs led throughout the game except a one-point deficit in the third and a short-lived tie in the final quarter.

Sophomore Lakin Gaddy put the Ladybugs on the scoreboard first with a layup followed by a three-point shot. Morgan Heath added another basket to put Alva up 7-0. Avery Lane scored on a three-pointer for Chisholm, but Gaddy answered with another trey. Alice Watkins added two points from the free throw stripe for the Lady Longhorns, but Alva still held the lead at 10-5. Ladybug freshman Hadlee Ohm took the basketball to the rim to score. Watkins added one more basket before the quarter ended with Alva leading 12-7.

Competition was fierce on the boards, and Emma Green grabbed an offensive rebound to score for Chisholm to start the second period. Ohm was fouled in shooting and made one of two free throws. Freshman Kylie Adair scored for Alva on an assist by Jaycee Kelln. Then Gaddy stole the ball and fed it to Kelln who scored and was fouled. Kelln didn't make the bonus shot, but Alva led 17-9. Junior Carly Argo extended the Alva lead with a right-wing three.

Emma Kate Kruska made a Chisholm basket on an offensive rebound. Then Watkins hit the basket from three-point range. Gaddy and Argo made unsuccessful trips to the free throw line. Ohm had her turn at the charity stripe, making one of two. Morgan Peeper was next to shoot free throws, making both for Chisholm. Ohm made one more shot, but it was cancelled by an offensive foul. At the half, Alva led 21-16.

Watkins led off the third quarter with a jump shot followed by two free throws from Peeper. The Lady Longhorns had cut the Alva lead to one at 21-20. Argo widened the gap with s two-point jumper, but Watkins answered with two straight baskets to give Chisholm a 24-23 lead.

Kelln scored on an Argo pass and was fouled. She sank the extra point, and Alva led 26-24 going into the final period.

Chisholm's Trinity Vogt made a basket to tie the score at 26 to start the fourth quarter. Gaddy hit a three-point shot, and Argo added another trey from the right corner to put Alva up 32-26. Watkins answered with a three-pointer. Kelln was fouled in shooting and made one of two chances. 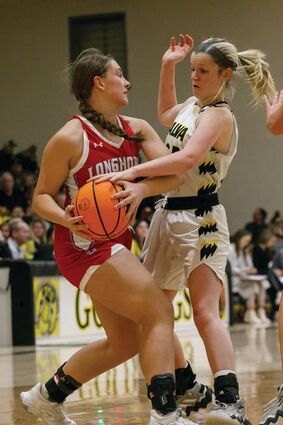 Alva Junior Morgan Heath (25) tries to take the ball away from the Lady Longhorn offense.

Kelln was fouled again as she went for a basket. She missed her first free throw. Her second shot rolled around and stopped just back of the rim. Another ball was used to knock down the game ball. Ohm scored to put the Ladybugs up 35-29. Heath was fouled and made one of two attempts. Ohm was fouled, but missed on the one-and-one. With 14 seconds left, Gaddy went to the charity line, hitting one of two chances, and the Ladybugs finished with the 37-31 win.

The Ladybugs were led in scoring by Gaddy with 12 points followed by Argo with eight. Kelln and Ohm each had six points, Heath three and Adair two.

Watkins led Chisholm with 18 points followed by Peeper with four and Lane three. Green, Vogt and Kruska each had two points.

Chisholm had a perfect six of six from the free throw line. The Alva Ladybugs also made six free throws but they had 16 tries. The Alva defense was very active, forcing 22 turnovers against the Lady Longhorns.

The Ladybugs are at home again Friday night as they take on the Newkirk Lady Tigers with tipoff at 6:30 p.m.