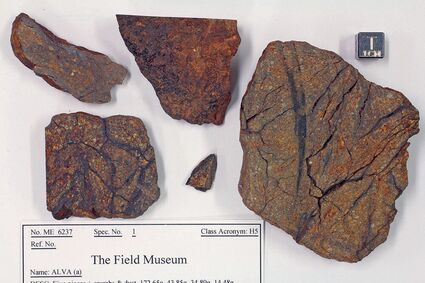 The Alva (a) meteorite is sliced into sections for this display in the field museum.

Capron resident and farmer Mark Schwerdtfeger found two unusual rocks on and near his farm in 2017. He found the first one in the spring of 2017 in his alfalfa field that looked suspiciously like a meteorite. He said it felt heavier than a normal rock, and it was attracted to a magnet. He sent it to the Robert A. Pritzker Center for Meteoritics and Polar Studies at the Field Museum in Chicago, which houses one of the largest collections of meteorites in the world, to be identified. Collection Manager of Physical Geology and Meteorites Jim Holstein confirmed that the rock is in fact a meteorite.

After his initial discovery and learning more about meteorites online, Schwerdtfeger started looking at the rocks on the ground and all of the rocks that he removed from the fields over the past 40 years with fresh eyes. Later that same year he found a second suspicious rock alongside a road about a mile away from the first one and sent it to Holstein, who confirmed that this was also a meteorite.

Meteorites, which are samples of parent bodies such as asteroids that make it to the Earth, are rare. They typically originate in the asteroid belt between Mars and Jupiter, although some very rare ones come from the Moon or Mars. Ordinary Chondrites, the most common type of stony meteorite, account for approximately 85% of all meteorites known to science. These space rocks are like time capsules that scientists can use to better understand how our solar system was formed along with answering countless other questions.

Though the two meteorites found by Schwerdtfeger are the more common Ordinary Chondrite type, they are distinct from one another. Geochemical and visual analysis done by the Field Museum determined that these meteorites are different enough from one another to warrant giving them different classification designations and different names.

The numeric designation indicates the petrologic type of the ordinary chondrite, which is a reflection of the amount of thermal alteration the rock has undergone during formation of the parent asteroid. The numbers range from 3-6 and the Alva meteorites were thus classified as H4 and H5 ordinary chondrites, respectively, indicating moderate to high degrees of thermal alteration.

Once the meteorites from Schwerdtfeger were classified, the results were submitted to the Nomenclature Committee of the Meteoritical Society, the official internationally recognized body tasked with naming meteorites, for approval. The committee recently approved the meteorites and their names: Alva(a) and Alva(b). The naming convention is based on the geographic location. In the United States, a meteorite is named after the nearest town with a post office, in this case Alva, OK. Schwerdtfeger donated pieces of these meteorites to the Field Museum. This generous donation is now a part of the museum collection and will be available to scientists around the world.

Before you go running off to find a meteorite for yourself, keep in mind that these are very rare objects. The fact that Schwerdtfeger found not just one, but two different types of stony meteorites is exceptional. Schwerdtfeger, who, as a result of his finds became an avid rock collector and picks up any rock that look interesting, was asked why he likes to collect and identify rocks replied, "After I found that first meteorite, I just couldn't help myself." Over the years, he has picked up tens of thousands of rocks to find these two meteorites, but that is no guarantee that you will find one. But if you do go looking for meteorites, don't depend on images from the Internet, as there are a lot of Earth rocks that can mimic meteorites.

Two important features to look for when assessing a potential meteorite are (1) does it have a fusion crust? (The outside of the rock is black as a result of atmospheric entry) and (2) is it heavier than a normal rock? (It is heavier due to the higher iron content). These criteria don't necessarily make it a meteorite. Many Earth rocks can have a dark exterior that is similar to fusion crust. Also, the fusion crust can weather away over time so fusion crust is sometimes not the best indicator. 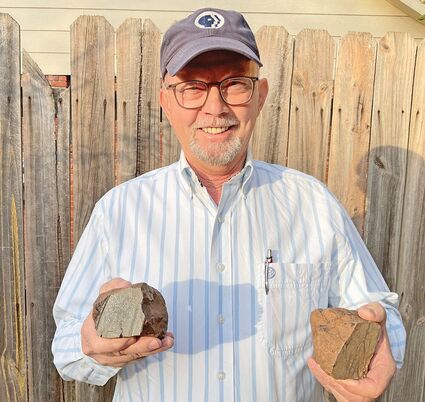 Mark Schwerdtfeger of Capron displays two meteorites he found. Finding a meteorite is unusual, but finding two is very rare.

There are also a lot of Earth rocks that contain iron such as magnetite. There are also other types of meteorites that are not going to feel heavier because of the lower iron content, but these are fairly rare. The most common objects that are mistaken for meteorites are magnetite, basalt and man-made slag. These account for a vast majority of "meteor-wrongs" (rocks mistakenly identified as meteorites). Though the Field Museum has suspended their meteorite identification program due to the lack of staffing for this purpose, you can contact a local geology club or university to identify your rock for you.

Holstein visited the Schwerdtfeger farm this past spring to look at some of the rocks that were collected and intends to return during the summer of 2023 with a volunteer team from The Field Museum to look for more meteorites. He is hoping to be as lucky as Schwerdtfeger.

(Jim Holstein is Collections Manager of Physical Geology and Meteorites, Robert A. Pritzker Center for Meteoritics and Polar Studies, The Field Museum in Chicago, Illinois.)