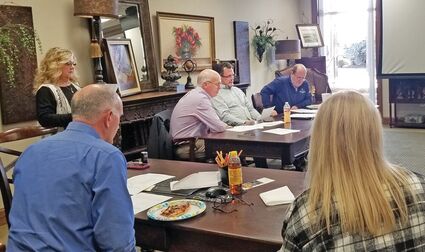 Woods County Clerk Shelley Reed (standing left) administers the oath of office to trustees of the Alva Arena Authority during a noon meeting Tuesday. Todd Holder (back to camera) is in left foreground. Trustees at table from left are Daren Slater, Mike Hood and Gregg Glass. At foreground right is Sonja Williams, secretary of the board. Not pictured are Dr. Janet Cunningham, Melinda Barton and Darrel Kline who also took the trustee oath.

The Alva Arena Authority members gathered Tuesday noon to take care of important end-of-year business and get an update on funding.

Woods County Clerk Shelley was present to administer the oath of office to all trustees for a new term. The trustees read the oath aloud in unison before signing and having signatures notarized by Reed.

Holder gave the treasurer's report. He said the bal...