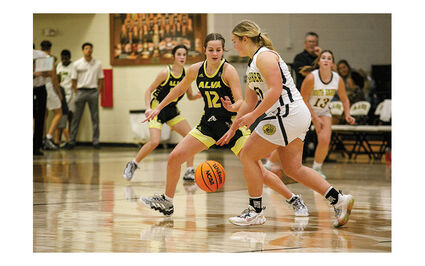 Alva senior Carly Argo (12) keeps her eye on the ball while blocking South Barber's Fiona Walz (20), who tries to get to the goal.

The young Alva Ladybugs entered the Alva-NWOSU Shootout Thursday night with three wins notched on their record. Pitted against the South Barber Lady Chieftains from Kiowa, Kansas, the Alva girls got off to a great start with a 19-2 lead at the end of the first quarter. The Ladybugs scored 16 points in the second period while holding South Barber to two points. At halftime, the score was Alva 35, South Barber 4.

Continuing their strong defense, the Ladybugs held the Lady Chieftains scoreless in the third quarter while adding 16 points to their total. South Barber managed four points in the final quarter, but the Ladybugs put 18 on the board for a final of Alva 69, South Barber 8.

Leading the Alva scoring was Jaycee Kelln with 14 followed by Carly Argo with 13 and Grace Gore with 12. Lakin Gaddy contributed 10 points while Morgan Heath had nine, Channing Ferguson six and Kylie Adair five.

The Ladybugs moved into the winner's bracket to face South Central while South Barber was scheduled to play Western Heights in the consolation side of the tournament.

On Friday, the Ladybugs took on South Central from Coldwater, Kansas. The Lady Timberwolves defeated Western Heights 65-6 on Thursday to advance in the winner's bracket.

Carly Argo had a hot first quarter, hitting three triples and scoring on two baskets for 13 of Alva's 18 points. South Central was held scoreless in the first quarter, suffering from difficulties in ball handling. The Lady Timberwolves were without their leading scorer Kodie Heard who was out with the flu.

Argo led the Ladybugs in scoring with 25 points, including seven three-point shots. Jaycee Kelln had nine, Morgan Heath and Grace Gore had five each, Hadlee Ohm and Channing Ferguson had four apiece, Kylie Adair had three and Lakin Gaddy two.

South Central was led in scoring by Kassidy Lee and McKenzie Jellison with seven points each followed by Molly Murphy with six, Izzy Hackney with four and Anna Dale with one.

The Alva Ladybugs advanced to face the Seiling Lady Cats in the championship game on Saturday. South Central was scheduled to meet Pawhuska for third place honors.

The Ladybug JV team took on Seiling in the first round of tournament action with the Lady Cats taking the 68-12 win. Seiling dominated the game, pouring in 27 points in the first quarter while holding the Alva girls scoreless. The Ladybugs managed two points each in the second and third quarters, adding eight in the final period. 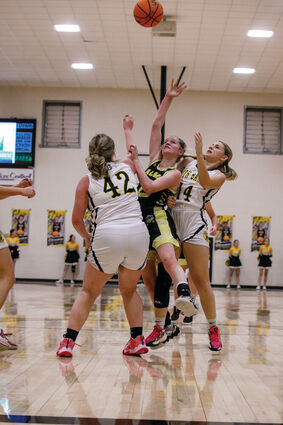 Ladybug Morgan Heath (25) gets blocked in by South Barber's Jessica Jahay (42) and Jazzmin Binning (14), but she is able to still get the ball in the basket.

Seiling was led by Braci Nyberg with 23 points followed by Teagan Hamar with 11. Aryahna Whetstone and Kenly Gore had nine each. Isabella Hammons had eight, Keirstin Briggs had six and Paige Coons had two.

On Friday, the Ladybug JV team took on Catoosa, losing 43-29 after a halftime score of Catoosa 31, Alva 14.

Catoosa was led by Zoe Brown with 23 followed by Tinsley Mitchell with 12. Amber Lucero had three while Cameryn Barclay and Lexi Buckmaster each had two.

The Alva JV was set to play Western Heights Saturday morning for seventh place. Catoosa was pitted against South Barber for the consolation trophy Saturday afternoon.