Easy laughter and anecdotes at Alva Church of God 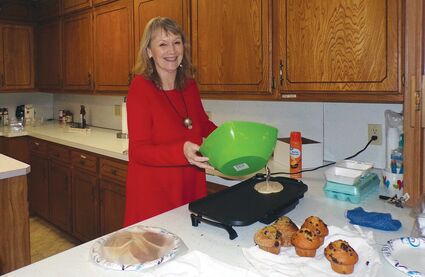 I found Pastor Sheryl White in the Church of God kitchen, up to her elbows in pancake batter. It was a Wednesday morning, and some of the flock had been in for a big family-style brunch. I'd promised to help her clean up, but, true to form, I arrived just as all the work was pretty much done.

"Would you like a pancake?" she asked, laughing. "I have enough batter for one more pancake."

As she cooked, she told me her story.

"I've lived in Kansas, Oklahoma, Texas and Indiana during my life," she began. "I was raised in Kansas. I got involved in the Church of God when I was a teenager, and I felt God calling me to ministry at that time."

White, who is 63 ("I tell everybody I'm 36 but that I do have a little bit of a problem with being dyslexic"), paused,

casting her mind back to that moment that set her life's direction.

"I was sitting out on a fence and God was just saying, "I'm setting you apart." I mean, it's just so weird! It just gives you chills when you think about it." But it would prove a long road before she would be at the head of her own church.

After high school, she attended Gulf Coast Bible College, now Mid America Christian University in Oklahoma City. Then she went to Anderson University's School of Theology. I'd asked a couple of questions about whether the schools were specifically Church of God schools, but it wasn't quite the right question.

"We don't like to say we're a denomination because we came out of a denomination. Anyone who's a Christian -- who's a believer -- we believe is Church of God, which means anybody. It's kind of like ... you know, in scripture Paul will write to the church of God in (such-and-such a place), using a little c. That's how we came up with our name," she said.

White clearly thrived in a religion that allowed her to explore various denominations during those years of learning.

She moved to Pratt after finishing her education, and then to Haviland, Kansas, where she taught at Barclay College, an Evangelical Friends institution. "They did not have a Church of God in the area, so I became a Quaker for a while!" she laughed. "They have a wonderful history and witness."

White was on Barclay's church staff as well as on their faculty. But when that came to an end, she took a job teaching music at Maxwell, Kansas.

"That was a huge change," she said, laughing. "I was on one of those temporary licenses just to get the students through." She also finished her Doctor of Ministry at that time in Houston, Texas.

"I was just really kind of searching, and I found a Methodist church out in Copeland, Kansas, and I'd drive 75 miles to preach there on a Sunday. And then they hired me full time, and so I was out there several days a week."

Being There for Family, Following her Calling

White, an only child, was concerned when her parents began having health problems. "My dad, particularly, had heart problems. So I moved back to Pratt, where I accepted a position of director of lay ministries at the Methodist church, and was there 10 years. I got to work with all the ministries of the church; I loved it."

She was on the first board of Youth for Christ in south-central Kansas, which was a program that started at Barclay College and works specifically with rural youth and rural families. The group wanted to buy the Baron Theater, "and they hired me because I know so many people in Pratt. So I worked for them for six years, and I loved doing that, but I just sensed that I needed to be doing something more that God called me to."

So she dedicated her next three years to going through the leadership focus program to be ordained. She was ordained in 2021. "I started looking around and searching (for churches)."

She noticed the Church of God in Alva, but the website seemed to indicate that they had a preacher already. After a couple months she realized that, no, they actually didn't have someone. So she contacted the appropriate people, and the church invited her to come out this past July 30 to give her first sermon, "and I never stopped since that point!" She laughed again; laughter clearly comes easily to White.

On Aug. 14, the Alva Church of God voted White in as their pastor. She moved to Alva Sept. 1, along with her 91-year-old mother, who in October fell and broke her hip.

"The Lord has really blessed us because she's done fantastic. We're so thankful for that this Christmas, that she's able to do just what she was doing before."

White is her mother's caregiver. "I run back and forth a lot," she chuckled. "But that's been quite an interesting journey."

Between her mother's fall and then having sickness in the church, she hasn't had the time to really get to know Alva as well as she'd like.

"I feel like I don't know enough people yet! But I'm super excited to be here, and I'm excited about what the Lord might have for us in Alva."

Signs, Connections, and an Underground Angel

"I have a little bit of a connection to Alva," she said. "I've never married, but I dated a man who went to school here. We were kind of soulmates and thought that something might come from that. But then he had a massive heart attack and died. But being here, it makes me feel I'm closer to him. He wanted his ashes to be placed in the Salt Plains Lake, so we went out there and had a service. And I can go out there and remember. He was a wonderful Christian man, and I know, I believe that he's smiling down. He always said, 'Sheryl, you have the gift, you should go for it! You should be a pastor.' So it makes me happy to know that God opened these doors for me."

"I had the honor of praying at the graduation this winter, and talked to a guy who knew him, which was nice! He and his brother both went to school there in the early '70s, so it's nice to find people with the same timeline."

White is also an author. Her book, "Underground Angel," arose from her Quaker experience, she said. "The town of Haviland was named after Laura Haviland. She was an underground railroad conductor up in Michigan, and she traveled all around the eastern seaboard, and helped many, many people escape. She was fantastic."

When White was invited to the Halloween celebration at the Cherokee Strip Museum, she was eager to explore the history on display.

"I found a picture in one of the rooms, and there was a man with the last name Haviland. So my goal is to figure out how they're related! Because they are! So that was pretty cool -- the Havilands followed me here!

"Underground Angel" was published in 2013 and is available on Amazon, although she's currently revising the book. "I feel it's really relevant to things we're going through today." The revised version will include White's 7 Steps of Good Trouble. If you can't wait for the revised book to come out, never fear: White has a YouTube channel called Underground Angel where she discusses Good Trouble. (Visit youtube.com/@undergroundangel1504 to learn more.)

What's to Come for Alva Church of God

In the new year, White and her board plan to hold a leadership retreat where they will do some visioning. She's hoping they can find ways of increasing connection among people, not only at the church but throughout the community.

But for now, she's just feeling thankful and wants to give back.

"I'm happy to be here, and I love to serve the community, so if there's anything I can do to be of service...." She emphasized that anyone is welcome at the Church of God, absolutely anyone.

"This is a very loving church, I feel so blessed to be here. We had some visitors come, and by the time I got to them, five people had approached them and thanked them for coming." And she laughed again with joy.