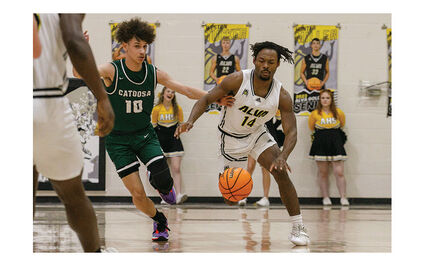 Alva senior Drake Wharton (14) tries to out-run the Catoosa defense down the court.

After winning 75-41 over the Enid JV and 73-35 over South Central, the Alva Goldbugs faced the Catoosa Indians in the championship game of the Alva-NWOSU Shootout Saturday. Catoosa beat South Barber 83-53 and Pawhuska 77-33 to advance.

The teams were neck-and-neck in the first quarter with Catoosa holding a one-point edge at 15-14. However, Catoosa scored 23 in the second period while holding Alva to 17. The Indians led 38-31 at halftime. Catoosa continued to out-score Alva 32 to 24 in the third period in the fast-paced game. Although the Goldbugs scored 33 points in the final period, it wasn't enough to make up the deficit. Catoosa took the first place trophy, winning 100-88, with the Goldbugs in second place.

Leading the scoring for Alva was Kyler Penco with 27 points followed by Weston Tucker with 19. Lantz Mathers had 14, Daylon Malone 10 and Aiden Ruiz eight. Phillip Randall made six points and Jaxon Jones four.

Catoosa was led by 6 ft. 6 in. Titus Miller with 25 points followed by Greyson Lewallen with 21, Chris Brown with 20 and Luke Beauchamp with 19. Sutton Woods made 15 points.

The Goldbugs were to travel to Fairview to take on the Yellowjackets Thursday night. Tonight (Dec. 16) the Goldbugs host the Perry Maroons with tipoff following the girls' game. 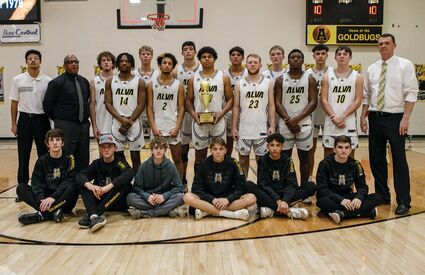 Alva Goldbugs fell to Catoosa and were named runners-up in the Alva/NWOSU Shootout Tournament.

The Alva JV boys faced Enid JV in the finals of the Alva-NWOSU Shootout on Saturday, playing for seventh place. The Goldbug JV team lost to Pawhuska 52-29 in the first round and to South Barber 49-47 on Friday. Enid JV lost to the Alva varsity 75-41 and to Western Heights 65-62 to reach the final game.

The Alva JV got behind in the first quarter 20-10 and couldn't make up the deficit. At halftime, Enid JV led 38-18. The young Goldbugs managed 14 points to Enid's 16 in the third period but trailed further behind in the fourth to lose 67-39 with Enid JV taking seventh.