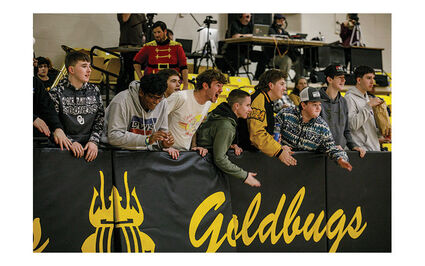 Alva student section gets fired up cheering for their Ladybugs.

The Alva Ladybugs notched two games in the win column to finish their schedule before the holiday break. Traveling to Fairview on Thursday, the Ladybugs picked up a decisive 52-23 victory over the Lady Yellowjackets.

In action at home on Friday, the Alva girls took on the Perry Lady Maroons, winning 43-16. The Ladybugs are now 7-1 for the season with their only loss to the Seiling Lady Cats in the finals of the Alva-NWOSU Shootout.

At Fairview Thursday night, the Ladybugs started off strong, scoring 13 points to six for the Lady Yellowjackets. In the second quarter, Alva added 15 more points to the scoreboard while holding Fairview to seven. The halftime score was Alva 28, Fairview 13. Carly Argo led the Ladybug scoring with three triples in the first half along with a two-point basket.

In the third quarter, the Ladybugs made 11 points, leading the Lady Yellowjackets who managed only three. Argo was shut down in the third, but Lakin Gaddy sank her second three-pointer of the game while Jaycee Kelln and Hadlee Ohm had two baskets each.

Alva continued to dominate through the final period, scoring 13 to seven for Fairview. The Ladybugs won 52-23.

Argo led the Alva scoring with 14 followed by Ohm with 11 and Gaddy with 10. Morgan Heath had eight points and Kelln five. Kylie Adair and Randee Perks scored two points each.

Fairview was led by Macy Nightengale and Teagyn Baker with eight points each. Addison Schmidt had four, Baylee Petty two and Karsyn Pendergraft one.

The Ladybugs were back on the floor Friday in a home game against Perry. The Lady Maroons came into the game with a 4-3 record. The Maroons have a couple of players out with injuries.

The Ladybugs started off strong, scoring 12 points before Perry got on the scoreboard. Argo started off with a three followed by a Heath jump shot. Heath was active all night under the basket. She grabbed an offensive rebound and stuck the ball through the net. Argo added another basket from three point range. Then Gaddy took it to the rim for the 12-0 lead. Perry's Makenna Justice finally scored a trey. Gaddy scored on another jumper. Perry added two more points from the free throw line, and Kelln sank a buzzer beater for the 16-5 Alva lead at the end of the first period.

Both teams were having a lot of turnovers along with problems sinking baskets. In the second quarter, Alva had only six points from a couple of treys by Gaddy and Argo. Perry made five points in the period. At halftime, Alva led 22-10.

Third quarter scoring was opened by Heath with one of two free throws followed by Kylie Adair who made both of her charity points. Heath added a basket, and Alva's lead was 27-10. The Lady Maroons finally got on the board with a basket from Kelsey Mitchell followed by a three-pointer from Justus. Alva finished out the scoring with Channing Ferguson scoring a basket and Grace Gore finding three-point range from the right corner. At the end of three, Alva led 32-15. 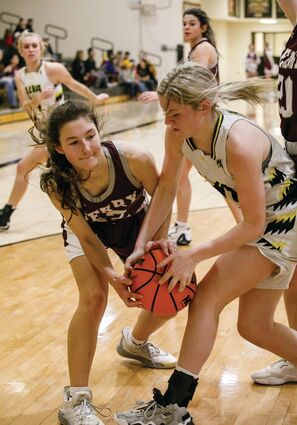 Senior Morgan Heath (25) struggles to get the ball away from Perry's Alyssa Goldsberry (12).

The final period was all Alva as they held Perry to just one free throw. Argo added another triple followed by a layup from Adair. Ohm made one of two free throws. Then Gaddy sank a three-pointer, and Adair made another basket. The final was Alva 43, Perry 16.

Alva scoring was led by Argo with 12 followed by Gaddy with 10. Heath had seven, Adair six and Gore three. Kelln and Ferguson each had two while Ohm had one.

Leading the Perry scoring was Justus with eight followed by Mitchell with five. Alyssa Goldsberry, Emery Halford and Alliyah Shrum each had one.

Following a holiday break, the Alva Ladybugs will be back in action Tuesday, Jan. 3, when they host Blackwell. Tipoff is at 6:30 p.m. Then they head into the Wheat Capital Tournament at Chisholm Jan. 5-7.