• New loan office established by local kids who made good 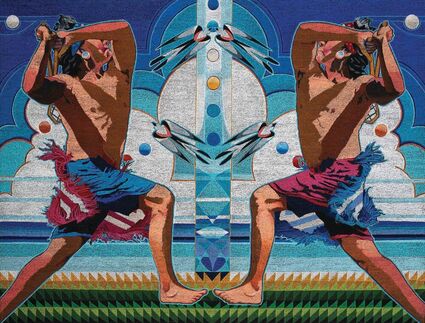 "Little Brother of War" by Starr Hardridge (36 x 48 inches, Acrylic on Venetian plaster on canvas). This painting by Hardridge was selected by NBC Bank as this year's representative Oklahoma art. Here, Hardridge imagines the first-ever stickball game of the ancient people of the Mississippian Mound Builder cultures in Oklahoma. Hardridge's art has been exhibited at the Smithsonian Museum of the Amerrican Indian, and appears in the State Capitol Building. Photo provided.

NBC Oklahoma, a new player in Alva's financial services organization, is a little different from most banks – it doesn't have a vault, for example. NBC's headquarters calls the Alva location a ""loan production office" that operates as a satellite to NBC in Enid. But that difference may be what makes it the perfect bank for many agricultural and business operators.

NBC, established in 1931 in Altus and now with assets of $900 million, has a handful of locations around the state in Kingfisher, Altus, a couple in Oklahoma City, and Enid. The bank in Enid decided to open a second location in Alva to meet the needs of area agriculture operations and businesses.

You'll most likely find Allan Poe inside the office at 510 5th St. in downtown Alva. Poe – a cattle rancher raised in Cherokee – is the assistant vice president and loan officer for NBC Oklahoma-Alva. He has a nicely set up office and comfortable waiting area with luminous works of art on the walls, and even a little kitchenette hidden to the side of the large conference room.

Poe primarily works out of the Alva location, but Tiffany Slater (NBC's vice president/lending coordinator) comes in from the Enid location periodically.

Slater is from Dacoma, Poe said, "so this is close for her, but it's not only that. She's one of the larger assets in terms of the people this bank has. She does a lot of credit analysis and is an officer of the bank, and I'd love it if she were here a lot more. She's such a wealth of knowledge."

Slater, Poe and NBC's Enid Market President Scott Bixler are all from this area, Poe said. "Scott is the president of the NBC-Enid location and grew up in Waynoka; Tiffany grew up in the Dacoma area; I grew up in Cherokee, and then lived in Waynoka for 15 years. That's probably as much as anything why this was a good fit for us, because we're from this area, we understand what it has to offer, and we already have a lot of customers, clients, in the area."

Poe said he has customers in Buffalo, Woodward, Medicine Lodge, Cherokee, Blackwell. "We really encompass this northern, northwest Oklahoma, southwest Kansas area. So this office has enabled us, as NBC, to make it easier for those customers to do business with us, and for us to be in better touch with them."

A Bank for Ag and Commercial Loans

"NBC as a whole, we're a nearly $1 billion asset bank," said Poe. "That allows us to do business on a large scale. Farming, agriculture is one of our biggest things, but we take care of businesses too. You think of a small business -- it doesn't take a very small business to need access to millions of dollars now. We can do that, that's regular for us."

While NBC is not really a new-business advisor, like the Small Business Administration, for example, Poe's approach is never say never.

"As a community bank, we want all businesses to succeed. Even though we don't typically develop businesses from the ground up, we develop relationships with our customers and like to help them however we can," Poe said.

"If someone came by and they had a legitimate business plan and had put a lot of thought into it, then we would work with them to find ways to develop it further," he added "I don't have time to sit here and write business plans, but I also have connections that can help them figure out where to go next. At NBC, our customers often become like family, and as a bank, we're cheering them on."

He understands the importance of those loans from a very personal viewpoint.

"I've been able to become a very large cattle operator, and I started with nothing," Poe said. "My family was not in the business. I'm a first-generation cattleman. If it weren't for someone who gave me the opportunity to be in this business, I wouldn't be. I see the need for that. I also have an understanding of how to manage the risk in that (business), so that's what I bring to the table, personally, and NBC has enabled me to use those skills to help people.

"I think we're competitive too. I very seldom get somebody who says hey, your rates are way out of hand. I'm not telling you we're going to be the cheapest on interest rate or term every time, but we won't be the highest either. My goal is and one thing I appreciate about NBC is they've enabled their rates to be at a competitive enough level that if someone wants to do business with me, then we can do that. We haven't priced ourselves out of the market."

While Poe Wasn't a Goldbug, He Practically Was

Poe lives in Cherokee, where he grew up, "but I also farm and ranch in Woods, Alfalfa and Major counties," he said.

Before joining NBC, Poe worked for Northwest Technology Center for 11 years. "A lot of what I did there was help develop business, so that's where I got those connections," he said. "I helped people with a lot of the development of their plan to the bank, so that's not new to me; that's kind of what I was doing," he said. "I was also very involved in the FSA loan program at the tech center. The Farm Service Agency, which is a federal program, has a loan program component to it designed for young farmers and ranchers or for expansion. I helped people obtain those loans, so that's really where my banking history started, per se."

Poe's official company bio added a few details. Before working at NWTC, Poe was the ag teacher at Waynoka. He earned a bachelor's in agricultural education from Oklahoma State University, and over the past 17 years has built a large cattle operation and an oilfield services company from the ground up.

Loans for farmers and ranchers to expand or purchase equipment makes up a good portion of NBC's business, but they also do a lot of commercial loans as well.

"I've got customers who have one rental house or two rental houses and they're looking to expand, so that's a business loan. To buy a piece of ground out there that someday they're maybe going to build a home on, we can loan money for that, and for house construction," he said, adding that NBC is an equal housing lender, which means their loan decisions can't be affected by an applicant's race, color, religion, national origin, sex, handicap, or familial status .

"We don't focus on home mortgage loans, but in terms of day-to-day business, developing business, operating loans, buying real estate to operate a business out of, buying agriculture land, or equipment for agriculture, or money to buy cattle, things like that, those are very much what our primary line would be," he said.

Giving Back to the Community through Art

Founded as the Great Depression got underway, NBC's literature says "our bank was committed to investing in our great communities, building relationships with our customers and providing the support for their success. (...) Times have changed but our focus has not. We are a community bank with a strong heritage – dedicated to helping individuals and businesses for more than 90 years." (Learn more about NBC Oklahoma online at nbc.bank.)

One of the ways NBC gives back to its communities is through supporting art and artists in Oklahoma. The bank each year commissions artists to create a painting as part of its NBC Oklahoma Artist Series. The bank also has commissioned or financed public works of art in different communities. One of those is a sculpture in Alva – "The Ranger" by Harold "H" Holden at Northwestern Oklahoma State University.

This year's selection is "Little Brother of War" by Starr Hardridge (an acrylic on Venetian plaster on canvas). It commemorates some of the very earliest people who lived on the land now called Oklahoma.

Long before the settlers arrived in Indian Territory, the ancient people of Mississippian Mound Builder Cultures occupied what is now known as Oklahoma. The Southeast Ceremonial Complex was one of the great civilizations before Europe's expansion. Complex trade centers were located from Spiro Mounds in eastern Oklahoma, across the Eastern seaboard from the Gulf of Mexico to the Great Lakes.

At these sites, stickball emerged as one of the first mass cultural sports in North America. Tribal nations cultivated national teams and the outcome of games settled diplomatic disputes, avoiding unnecessary military campaigns. Because of this significance, stickball became known as the "Little Brother of War" – and the subject of Hardridge's painting.

Stickball has been sustained across millennia and remains a highly competitive sport today. Seven of the tribes in Oklahoma maintain national teams and some communities play stickball as a ritual. When played socially, the game can include men and women, young and old; it is similar to combining rugby and lacrosse. 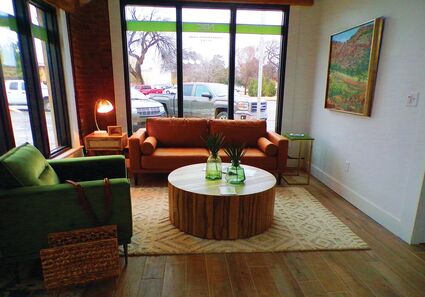 This pleasant seating group is the waiting area of NBC Oklahoma's Alva location at 510 5th St. Photo by Kathleen Lourde

Hardridge's work has been exhibited at the Smithsonian's National Museum of the American Indian, and his work is included in the art collection of the Oklahoma State Capitol building. Starr Hardridge grew up in Oklahoma where he is an enrolled member of the Muscogee Nation.

See more information about this painting and others in the Artist Series, the bank's art initiatives and the bank's Wigwam Gallery in Altus online at nbcwigwam.art.

Poe especially likes NBC for its Oklahomans for Oklahoma type of approach to lending.

"One thing interesting about NBC from the community standpoint is that it's an Oklahoma-based bank that focuses on growing Oklahoma. We're in the business of loaning money, that's what we do, and so hopefully we can enable you to make more money by us working with you, and that's the attitude from top down."