• School board and administration considering how to pay for improvements 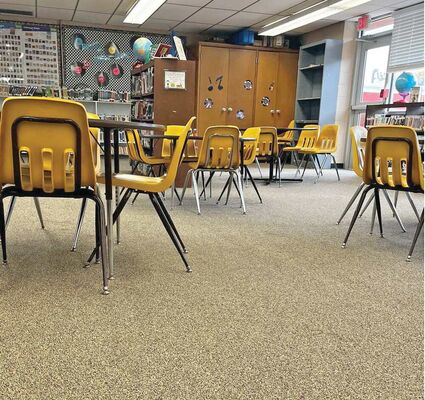 It's not the angle of the photo. The Lincoln Elementary School library floor and walls slope due to settling. It's even easier to see in person.

Walking through the door of the library at Lincoln Elementary School is a little like stepping into a carnival funhouse. There's a sense of imbalance as you navigate the sloping floors. Walls look tilted. A strategically placed book under a leg keeps a table even. The east foundation wall is decidedly out of plumb.

It's easy to see why this is one of priority items for Alva Public Schools projects. A survey circulated to school staff and to the strategic plan committee asked that a list of projects be ranked according to priority. The Lincoln library floor slope and foundation was ranked second by staff, right being roof repairs to fix leaks. It received a fourth place ranking by committee members.

Lincoln was one of the schools toured by Alva Board of Education members so they could see the problems firsthand. Alva Schools have retained the Enid architectural firm of Corbin, Merz and Haney to look at the Lincoln library foundation wall and floor slope in addition to the roof repairs and replacements and ADA access to the high school vocal room. A structural engineer will also look at these projects. Insurance will help pay for the roof repairs.

Other projects that were ranked in the survey include replacement of Longfellow Elementary single pane windows, HVAC in music and counseling at Longfellow, and activity buses.

According to Superintendent Tim Argo, committee and staff also prioritized improvements by school site. Continuous improvements are needed in technology, infrastructure, security enhancements and the track and field area. Also discussed are the planned parking expansion project to the north parking lot at Alva High School, the high school "snake drive" and the best use of office space at the high school. 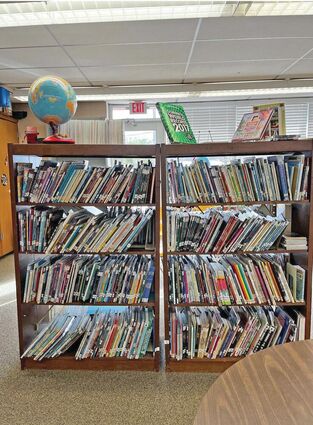 Comparing the top of the bookcase to the line between wall and ceiling, it's easy to see how the room slopes down to the left in the Lincoln Elementary School library.

During the Dec. 5 school board meeting, Argo reported on current projects. Bids were scheduled to be opened Dec. 6 for the cafeteria project at the high school. This project will upgrade the facility and include ideas from a student committee. The estimated cost is around $150,000. This project will be paid through the child nutrition fund, using excess money that accumulated due to lunches being provided free.

A paving project with no cost estimate is being planned at the high school. The architect will be presenting plans later although Argo went through some of the ideas with the school board.

Argo said in a letter to the community (Dec. 18 Alva Review-Courier) that the administrative team along with the board of education will begin to develop a plan for the financing of these projects in the second semester.