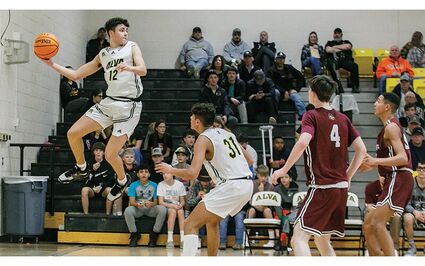 Alva's Kyler Penco (12) leaps to save the ball from going out of bounds and throw it back in.

Alva Goldbug head basketball coach Shane Feely had his 300th career win on Dec. 15. Tuesday night before a home crowd, the Goldbugs commemorated this milestone with a presentation of a special basketball and a picture. The crowd joined in with applause as a video message about his accomplishment was displayed.

The Goldbugs had a slow start in the first half of play Tuesday night with Blackwell tying the score in the first quarter and pulled ahead by five points in the second. The Goldbugs led by four points, 13-9, at the end of the first period. By halftime, Alva built a slightly larger lead at 30-23. After the break, the Godlbugs caught fire, scoring 21 points in the third quarter while holding the Maroons to five. With a 51-28 lead, the Goldbugs brought players off the bench in the fourth. Alva won 65-37.

The first point in the game came from a free throw by Goldbug Philip Randall. Kyler Penco and Daylon Malone each scored baskets. Blackwell got on the scoreboard with two made free throws by Kevin Rios. Penco added two more points on a basket but missed both chances when he went to the charity stripe. Alva now led 7-2. Drake Hankins sank a deep three for Blackwell, and Charlie Lux added a basket to tie the score at seven. Malone gave Alva the lead back with a basket. Randall made two points from the free throw line. Cody Anderson scored a basket for the Maroons. Then Malone sank a basket from the foul line. Alva led 13-9 at the end of the first quarter.

Rios opened second quarter scoring with two points for the Maroons. Malone added two for Alva on a Penco assist. Lux sank a three-pointer and was fouled while making the shot. He was able to make all three free throws. Those six points put Blackwell in the lead 17-15. Then Lux took Blackwell's score to 20 on a three-point shot. Penco single-handedly took back the lead for Alva with a basket followed by a free throw followed by back-to-back three-pointers. Alva now led 24-20. Lux brought the margin down to one as he made a trey for the Maroons. However, Malone and Penco each scored for Alva followed by two made free throws from Malone. Alva led 30-23 going into the halftime break.

Alva's Aiden Ruiz opened second half scoring with a basket and a trip to the foul line where he added a free throw. Penco added an Alva basket. Blackwell's Warren Gerboth scored, and Ruiz made another Alva basket. Rios went to the free throw line, making one of two shots. Ruiz sank a three-pointer, and Alva led 40-26. Rios scored for the Maroons, but that was the last of Blackwell's points for the quarter. The Goldbugs went on an 11 point scoring run led off by Jordan Lohmann with a basket. Malone made one of two free throws. Penco scored a basket followed by one from Weston Tucker. Malone and Penco finished out the quarter with baskets. Alva led 51-28 going into the final period. 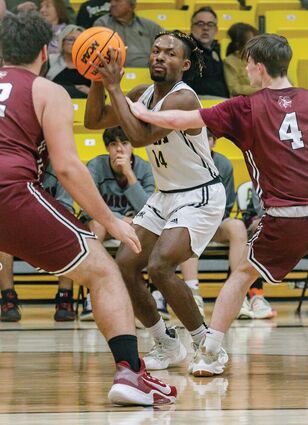 Goldbug Drake Wharton (14) looks around for an open teammate.

Drake Wharton grabbed an offensive rebound and was fouled as he tried to put it through the hoop. He made both free throws for Alva. Lohmann added another Goldbug basket. Tayln Lute scored for the Maroons. Lohmann scored again for Alva on a layup. Goldbug Aiden Faison scored a basket, and Alva led 59-30. Nik Flyingout hit a basket for Blackwell. Alva's Kellan Penco scored on two made free throws. Davin Christian hit a Maroon three-pointer followed by a basket from Flyingout. Kellan Penco scored again, and Alva's Kade Parker finished out the game with a basket. Alva won 65-37.

Kyler Penco led the Goldbugs in scoring with 21 points followed by Malone with 15. Ruiz had eight, Lohmann six, and Kellen Penco four. Randall scored three points while Tucker, Faison, Wharton and Parker each had two.

The Maroons were led by Lux with 14 points while Rios had seven and Flyingout four. Christian and Hankins each had three. Gerboth, Lute and Anderson made two points apiece.

The Alva Goldbugs are now 8-1 on the season going into the Wheat Capital Tournament at Chisholm on Thursday afternoon.