Ladybugs have decisive 53-17 win over Blackwell 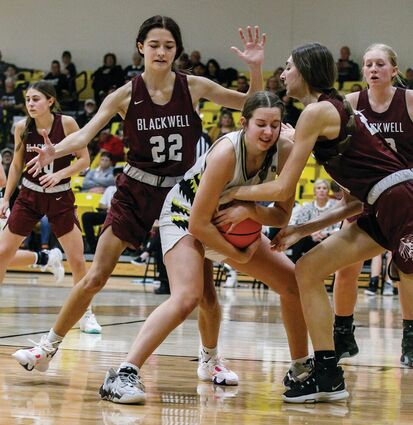 Senior Carly Argo (12) fights the Blackwell defense for the rebound.

The Alva Ladybugs had no trouble handling the Blackwell Lady Maroons Tuesday night. Playing before a home crowd, the Ladybugs ran up 12 points before Blackwell could get the ball through the hoop.

At the end of the first quarter, Alva led 12-5. In the second period, the Lady Maroons managed to add only one point while the Ladybugs added 15 to lead 27-7 at halftime. The Alva girls continued to out-score Blackwell adding 13 points in each of the final two quarters while the Lady Maroons managed only five and six. The Ladybugs came out on top 53-17 in the decisive win.

Carly Argo opened scoring with a basket followed by a three-pointer from the left corner. Jaycee Kellen and Kylie Adair added two points each. Lakin Gaddy finished out the first quarter scoring for Alva with a triple. After Alva's 12 points, Samantha Vowel finally scored on a baseline jumper for Blackwell, and Kinley Botts added a trey from the left wing. The first quarter ended with Alva leading 12-5.

Gaddy led off the second quarter with seven points, including a trey, while Botts managed one free throw for Blackwell. Hadlee Ohm sank an Alva basket followed by one from Gaddy off the back iron. Then Ohm scored again on an assist from Channing Ferguson. Morgan Heath was fouled as she went up for a shot. She made both free throws. Blackwell was held to one point in the period, and Alva led 27-6 at halftime.

Heath started off scoring in the third quarter with a stick-back on a teammate's missed shot. Bree Rowe scored for Blackwell on a jumper. Kelln made a basket on a pass from Gaddy. Then Rowe made another shot. Blackwell's Maysa Edgar was fouled and made only one of two free throws. Alva now led 31-11.

Heath sank a basket from three-point range on a Kelln assist. Ohm went to the free throw line and made both shots. Ferguson was next on the foul line, but missed both tries. However, her next trip to the line paid off with two made free throws. Alva led 40-11 at the end of the third quarter.

Blackwell's Edgar led off fourth quarter scoring with a three-pointer. She was fouled on the shot and added one more point. Ohm went to the free throw line, scoring on one of two chances. Then Ohm added a basket for the Ladybugs. The score was Alva 43, Blackwell 15. 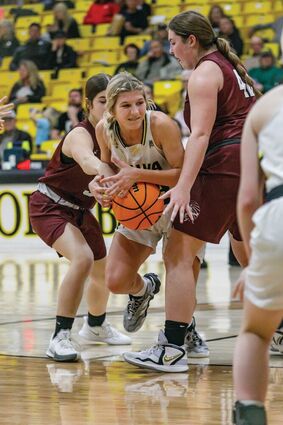 Alva's Channing Ferguson (24) fights to keep the ball and push through the Lady Maroon defense.

Adair increased the Alva lead with a basket. Then she was fouled and made one of two free throw shots. Reese Lambert scored her only basket for Blackwell. Alva's Triniti Miller made a basket after the ball rolled around the rim. Mya Williams added a three-pointer for the Ladybugs, and Miller finished out the game with a basket. Alva won 53-17.

Gaddy led the Alva scoring with 12 points followed by Ohm with 11 and Heath with seven. Argo and Adair had five points each. Kelln and Miller scored four points apiece. Williams had three and Ferguson two.

Edgar led the Lady Maroons with five points while Botts and Rowe had four each. Lambert and Vowel each made two points.

The Ladybugs, coached by Kris Gore, increased their record to 8-1 as they moved into the Wheat Capital Tournament at Chisholm on Thursday afternoon.