Looking ahead to the 2023 legislative session 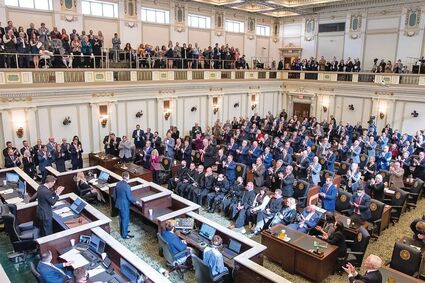 Legislators applaud during Gov. Stitt's State of the State address at the Capitol on Feb. 7, 2022. Few lawmakers wore masks and no distancing precautions were being taken during the speech.

With holiday festivities all but wrapped up, it's time to shift focus toward what lies ahead in 2023.

Bill filing is still underway, with the legislature facing a Jan. 19 deadline to introduce bills and joint resolutions. But through public statements and initial filings, lawmakers have started to signal what their priorities will be in the coming months.

Here's a preview of the kinds of proposals lawmakers will likely consider this session:

Reducing taxes appears to be top of mind for legislative leaders.

During a State Chamber public forum last month, House Speaker Charles McCall, R-Atoka, said lawmakers would focus on tax reform in 2023. During a special session in June, the House approved a bill proposing a permanent 0.25% personal income tax reduction, but the Senate blocked the proposal.

With a supermajority in both chambers, Republicans have the power to push such proposals to the governor's desk. They'll just need to reach a consensus that squashes concerns about a potential revenue shortfall.

While we're less than months removed from the November midterm election, the next cycle is fast approaching. Lawmakers aiming to pass voting legislation ahead of the 2024 presidential primary will need to do so this year.

One specific voting access issue to watch: Oklahoma's long-awaited online voter registration has still not fully launched due to technical issues. Sen. Julia Kirt, D-Oklahoma City, filed legislation last week that proposes a Dec. 31 deadline for getting the system up and running.

Proposals to require a higher vote threshold or increased signature collection garnered some legislative support last year but flamed out in the final weeks of the session.

This year, as voters consider a citizen ballot initiative to legalize recreational marijuana, lawmakers appear poised to consider similar proposals. Sen. Warren Hamilton, R-McCurtain, issued a press release in November stating he plans to carry a bill that would require a two-thirds majority for state questions to pass.

An important note: Any legislation on ballot initiatives must be sent to a vote of the people, as it modifies the state constitution.

A proposal last year to allow families to use state funds to cover private school costs fizzled out, in large part because of opposition from rural lawmakers.

Gov. Kevin Stitt, as well as dozens of state legislative candidates, campaigned on getting school voucher proposals through the legislature in 2023. But details on a plan to generate rural support remain scarce, according to reporting from Kayla Branch of The Frontier.

In a statement to The Frontier, McCall said a compromise will require "finding a policy that gives all parents and children the same opportunity regardless of geographic location."