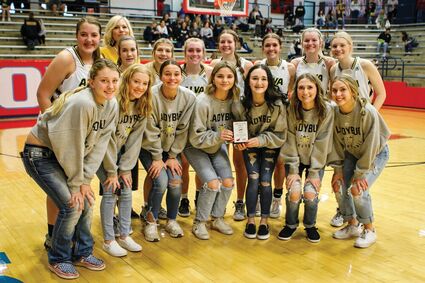 Alva Ladybugs are all smiles with their hard earned win against the Lady Boomers Saturday afternoon. The Ladybugs placed third in the Wheat Capital Tournament at Chisholm after beating Woodward 50-46.

The 3A Alva Ladybugs found themselves matched up with the 4A Woodward Lady Boomers in the finals of the Wheat Capital Tournament in Chisholm Saturday afternoon. Playing for third place, the Ladybugs were coming off a loss to Jones after winning the first round against Perry.

The first half of play was close with Woodward edging Alva 12-10 at the end of the first quarter. The Ladybugs turned it around in the second to lead 22-17 at the half. The final half continued close with Alva building a 12-point lead in the last quarter before seeing it dwindle to four points. The Ladybugs took the win 50-46 and the third place trophy, an accomplishment the team hasn't enjoyed since 2013.

Woodward senior Thessaly Pfeifer started off scoring for the Lady Boomers, but Alva sophomore Lakin Gaddy answered with two baskets. Hadlee Ohm scored, and Alva led 6-2. Jaycee Kelln was fouled and made one of two tries, extending Alva's lead. Michelle Ibarra scored for Woodward. Then Pfeifer hit back-to-back baskets followed by a free throw to tie the game at seven all. Ibarra put Woodward ahead with a basket, but sophomore Carly Argo sank a shot from three point range to give Alva a one-point advantage. Pfeifer was fouled while shooting a three. She went to the line and made all three free throws to put Woodward up 12-10 at the end of the quarter.

Ohm started the second quarter scoring and was fouled. Her free throw gave the Ladybugs a one-point lead. Gaddy scored from three point range to widen the margin. Woodward's Riley Moore made two consecutive trips to the free throw line, making three of the four opportunities to put Woodward within two at 16-14. A 6-0 run by the Ladybugs increased the lead with two baskets from Gaddy and one from Kelln. Briley Douglas-Fisher scored for Woodward, but Alva led 22-17 at the half. 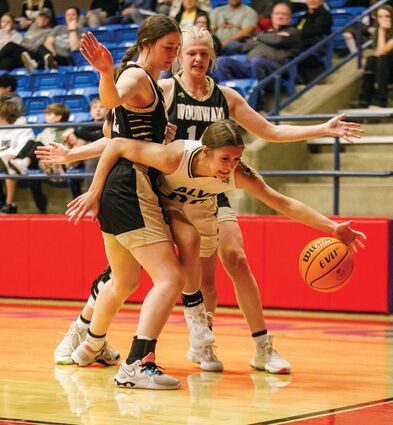 Alva's Lakin Gaddy (00) pushes through the Lady Boomer defense to get to the basket.

Kylie Adair and Morgan Heath provided plenty of defensive effort to hold Woodward in check as the Ladybugs continued to hang onto their lead in the second half. Pfeifer, who hadn't scored in the second or third quarters made a big push in the fourth, scoring 12 points. Alva was up 50-38 when Pfeifer hit back-to-back baskets followed by a free throw and a trey in the final minutes. It wasn't enough, and the Ladybugs brought home the third place trophy, finishing 50-46.

For Woodward, Pfeifer led with 20 points followed by Averi Edwards with ten. Douglas-Fisher had six while Ibarra had four. Jocelyn Treece and Moore had three each.

The 10-2 Ladybugs will have a few days off before hosting Oklahoma Bible Academy on Thursday with tipoff at 6:30 p.m. The Ladybugs will travel back to Chisholm next Friday, Jan. 13, for a 6:30 p.m. game.