Goldbugs take down the Bears to play for championship 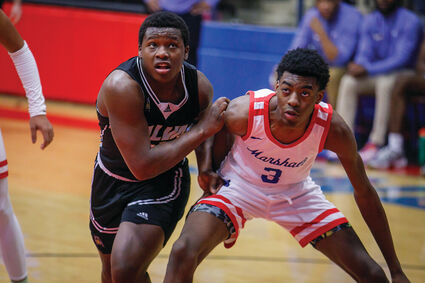 Alva's Lantz Mathers tries to get around the John Marshall defense to block for the rebound.

In the second round of the Wheat Capital Tournament Friday at Chisholm, the Alva Goldbugs faced the Class 4A John Marshall Bears. The Bears were strong on defense while getting more than their share of rebounds, scoring 15 points in the first quarter. Kyler Penco was the only Goldbug to score and kept Alva in the game with the Bears leading 15-8 in the first period. Alva turned things around in the second quarter to take a 29-23 at halftime. A big third quarter put the Goldbugs up 56-39, and neither team let up in the fourth.