Ladybugs to play for third place after loss to Jones 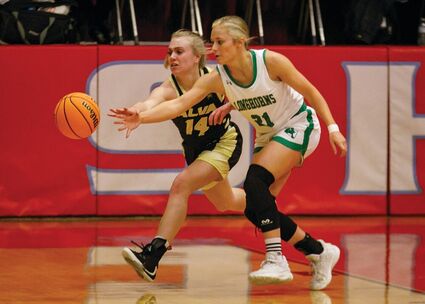 The Alva Ladybugs faced a tough Jones team in the second round of the Wheat Capital Tournament at Chisholm Friday. The Ladybugs managed only six points in the first quarter while the Lady Longhorns more than doubled them for a 15-6 lead. The Ladybugs improved in the second quarter to total 11 points while holding Jones to eight, but Jones led 23-17 at the half. The Jones team had a blistering 22 points in the third quarter to lead by 45-23. In the last period, the Lady Longhorns showed their pace to score ten points while Alva made seven.

The final was Jones 55, Alva 30. The win pits Jones against the Kingfisher girls for the tournament championship on Saturday. The Ladybugs, with their second loss of the season, moved into the third place game against Woodward Saturday afternoon.

Sofi Woodson, a 6-foot-2 junior, led off the scoring with a put-back for Jones. Morgan Heath answered for Alva to tie the score. The Ladybugs held a momentary lead as Heath went to the free throw line and made one of two shots to move Alva to a 3-2 lead. That didn't last long as Jones dominated the scoring the remainder of the quarter with a total of 15 points, including two treys. Lakin Gaddy added a three-pointer for Alva. At the end of the first period, Jones led 15-6.

The Ladybugs managed a rally in the second quarter, tallying 11 points to eight for Jones. Carly Argo and Grace Gore both found three-point range while Hadlee Ohm sank two baskets. Channing Ferguson made a free throw shot. The Lady Longhorns had one basket each from Woodson, Zoe Tucker, Boston Berry and Jaelen Maples. At the half, Jones led 23-17. 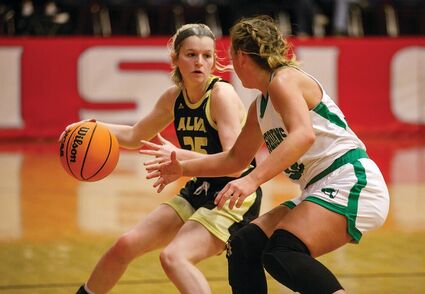 Alva's Morgan Heath (25) fakes out the Jones defense to be able to go around her.

A 10-0 run by Jones to begin the second half put the Ladybugs further behind. Gaddy had four points, with two of them from free throws. Jaycee Kelln hit a basket, and Alva had only six points in the quarter. For Jones, Maples added two triples and a basket. Berry had a triple and two baskets, and Tucker added a trey. Four points from Kasia Hansen finished out their 22 points for the quarter, making their lead 45-23.

With the significant scoring gap, Jones eased off in the final period. Argo hit another trey for Alva while Gaddy and Ohm each added a basket. Woodson scored four points in the final period while Hansen added three, one of them a free throw. Maples added two points and Audrey Bain made one of two free throw chances. The final was Jones 55, Alva 30.

Leading the Ladybugs in scoring was Gaddy with nine points followed by Argo and Ohm with six points each. Heath and Gore each had three points, Kelln two and Ferguson one.

Maples led the Jones team with 15 points followed by Woodson with 12. Hansen scored 10 with Berry making nine and Tucker eight. Bain finished out the scoring with one point.