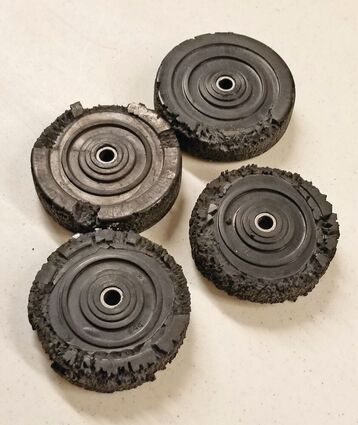 This is a sample of the casters replaced on folding bleachers at the Alva Recreation Complex. Director Courtney Nesseralla showed them to the Parks and Recreation Board Wednesday.

Six motors and 80 to 90 casters were replaced in bleacher renovations at the Alva Recreation Complex (ARC), according to Courtney Nesseralla, Alva Parks and Recreation director. The casters or wheels and the motors were original equipment and showing a large amount of wear. Nesseralla brought a sample of the casters to the Parks and Recreation meeting Wednesday so board members could see their severely worn condition.

Bleacher renovations also included removing one row of seating from the folding bleacher sections. After the meeting, some board members checked out the change. Spectators will no longer be seated right up to the edge of the playing area. Rails at the end of the bleachers have been replaced so they can fold up with the seating instead of needing manual removal. Hand rails in the center still need to be removed, but the chore is much less time consuming.

The ARC gym was a busy place Wednesday afternoon with pickle ball being played at one end while youngsters practiced basketball at the other end.

Nesseralla told the board members that the roof and window repairs seem to have worked. However, the ARC experienced some waterline leaks on the south side of the facility. The main leak was at a faucet that is not used so the line was capped off by the city water department. There were also a couple of small repairs of water leaks needed at the baseball and softball fields, but they were held up waiting for parts.

With sadness, Nesseralla announced she is losing her assistant director, Tatum Lehl, who has taken a job in the city office. She will be taking applications for that full time position.

Basketball signups haven't set a record, but they were close with 38 teams. Soccer signups will begin soon with games to start in March.

Nesseralla added that gate numbers have increased at events and concessions are showing higher sales.

Parker discussed the multiple waterline breaks the city has been experiencing. He said with the exception of one, the breaks were at a junction and not in the line itself. That was the case at the ARC where two valves failed at a T-junction. Parker said they think ground heaves are causing the joints to become unsealed. There's not much to be done other than keeping supplies on hand to fix the problem.

The mayor said the city has received word that they received a $1 million grant of ARPA funds through the Oklahoma Water Resources Board. This replaces a mile of the water supply line from the wellfield to Alva. The location is south of Hopeton and is the worst section of the line.

Parker said in Tuesday's city council meeting, a budget item when approved will move swimming pool revenue (donations) and expenses to the parks and recreation budget.

The only action items on the agenda were to approve minutes of the Nov. 9 meeting and the financial reports. Both were approved unanimously.