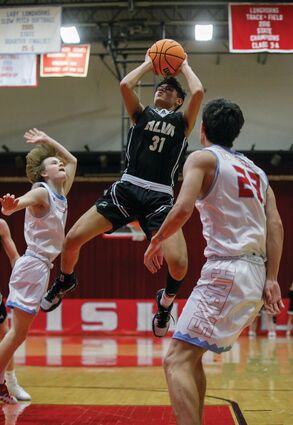 Last week's Wheat Capital Tournament at Chisholm gave the Longhorns a courtside view of how to defend against the Alva Goldbugs. They obviously took note of Kingfisher's strategy using double defenders to keep Goldbug senior Kyler Penco from scoring. In the Nov. 29 opening game of Alva's season, the Goldbugs defeated Chisholm 56-39 at home. It was a different story this time as the Longhorns took a hard-fought victory 61-59 over Alva.

Penco managed a respectable 19 points in the game although he's been scoring in the 30-40 point range recently. It was clear early that this game would be close. Alva led by only one point at the end of the first quarter and held a 33-26 edge at halftime. Chisholm upped their scoring in the final two periods while holding Alva to 13 points per quarter.

The Goldbugs opened the game with baskets from Penco and Daylon Malone. Chisholm senior Lucas Easter made one of two free throw shots. Easter then scored and was fouled for another three points, tying the score at 4-4. Penco made a basket, but Huston Lane answered to tie. Malone sank a trey and followed that with a basket to give Alva an 11-6 lead. Kellen Epps was fouled, making one of two shots. A trey from Camden Daniels and a basket from Garrett Harves gave the Longhorns a one-point lead, but Philip Randall made it to the hoop to put Alva up 13-12 for the quarter.

Longhorns Aiden Burd and Lane sank three-pointers to start the second quarter with a lead of 18-13. Weston Tucker scored for Alva and was fouled, making that shot for three points. A free throw and a basket from Epps increased the Chisholm lead to 21-16. Randall sank a basket off a Malone pass, and Penco got through defenders to score. Aiden Ruiz went to the free throw line, making both shots and giving Alva a one-point lead. Randall grabbed an offensive rebound and stuck the ball through the hoop for a Goldbug margin of 24-21.

Penco scored again, and Ruiz made a basket on a put-back. Keefer scored for Chisholm, but Penco managed another Alva basket for a 30-23 lead. Easter scored for the Longhorns and was fouled, making the charity shot. Scoring finished out with Penco making two free throws while Tucker added another one. The Goldbugs led 33-26 at halftime.

Ruiz started off the third period with a basket. Daniels added a trey for Chisholm. Goldbug Jaxon Jones scored on a Malone assist. Keefer made a basket, and Langley Aman sank a three-pointer to put Chisholm within three at 37-34. Penco scored two points for Alva. Keefer made a basket and the foul shot after. Alva's lead was cut to two points. Penco scored again, and Ruiz made one of two free throws.

Daniels scored for the Longhorns, and Ruiz answered for Alva. Epps sank a basket followed by a three-pointer from Daniels, and the score was tied at 44 all. In the last seconds of the quarter, Malone went in for a layup to give Alva a 46-44 lead.

Burd led off the final period with a trey to edge Alva by one. Then Epps added two free throws to increase the Longhorn lead. Ruiz scored on a stick-back, but Epps sank a trey, and Chisholm led 52-48. Tucker and Penco made Goldbug baskets to tie the game at 52. Epps scored a basket for the Longhorn lead. Penco went to the free throw line amid the loud Chisholm home crowd, making one of the two shots. Ruiz scored to give Alva the edge at 55-54.

Daniels and Epps added baskets for a 58-55 Longhorn lead. Fouls were rampant, and Randall went to the line to sink two free throws. Malone added a basket to put Alva up 59-58. The Goldbugs were unable to capitalize on a steal by Jones. Daniels sank a three-pointer to give the Longhorns the 61-59 lead, and Goldbug coach Shane Feely called a timeout. 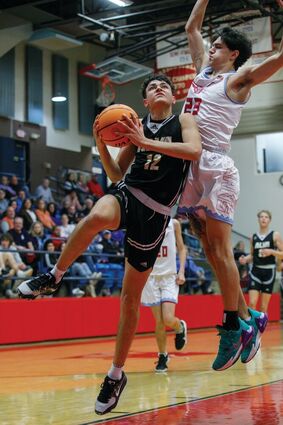 Alva's Kyler Penco (12) lays the ball up for two-points with Chisholm's Kellen Epps (23) trying to stop him.

Penco's jump shot didn't go in. Out of a Chisholm timeout, Epps was fouled but couldn't make the one-and-one. Randall grabbed the rebound and passed to Malone. After passes and maneuvering, Penco tried for a final basket, but it wouldn't go in. Chisholm won 61-59.

Penco led the Alva scoring with 19 points followed by Ruiz with 13 and Malone with 11. Randall had eight points, Tucker six and Jones two. Alva managed to score only one of ten attempts from three-point range while Chisholm heated up with nine made threes.

Epps led the Longhorns with 15 points followed by 14 from Daniels and 13 from Easter. Burd had six, Lane five, Aman and Keefer three apiece, and Harves two.

The Goldbugs are now 11-3 for the season as they travel to Newkirk for a Tuesday night game. They finish out the week at the Pawhuska Invitational, taking on the Ponca City JV at 5:30 p.m. on Thursday.