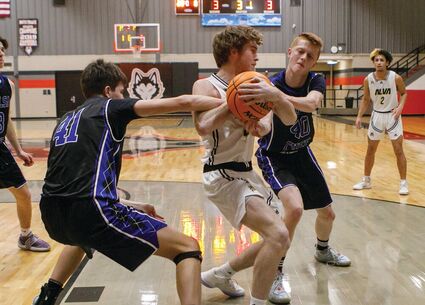 Senior Phillip Randall (20) struggles to keep the ball away from the Arrow defense.

In the second day of tournament play at Pawhuska, the Alva Goldbugs took on Tulsa CHEF, a Christian school team. Although the Arrows edged the Goldbugs in second quarter scoring, they never posed a serious threat. The Goldbugs won 67-45 to play for the top trophy on Saturday.

Alva jumped out to a 21-8 lead in the first quarter. The Arrows tried for a comeback in the second, scoring 15 points to 14 for Alva, but the Goldbugs kept a 35-23 advantage going into halftime. In the third quarter Alva poured in 22 points while holding the Arrows to six for a 57-29 Goldbug lead. In the final quarter, Coach Shane Feely emptied the Alva bench. Tulsa CHEF managed 16 points to 10 for Alva, and the Goldbugs took the win 67-45.

Before the game began, Alva senior Kyler Penco had amassed 994 points in his Goldbug career. It didn't take long to go over the 1,000 mark. Jaxon Jones started off Goldbug scoring with a layup. Then Penco scored four times starting with two baskets, a steal leading to a fast-break, and finishing with a right wing three. Alva led 11-0. Thad Graves finally scored for the Arrows on a stick-back. Daylon Malone added a basket to Alva's score although he missed the extra free shot. Penco sank another basket. Graves went to the free throw line, making both shots and then added a basket to bring the Arrows to six points. Weston Tucker scored for Alva. Penco added two more baskets, one on an Aiden Ruiz assist and another on a strip steal. The final basket of the quarter was made by Kent Zervas for the Arrows. Alva led 21-8.

In the second quarter Isaiah Parham started off with a trey for Tulsa CHEF. Penco scored an Alva basket. Graves sank a three-pointer followed by a basket. Malone widened the Alva lead to nine with a basket. Penco scored on a put-back and made two free throws. Parham added two points for the Arrows, and Alva led 29-18. Alva's Lantz Mathers went to the charity stripe, making the first of two chances on a one-and-one. Penco scored off a rebound. Parham sank a basket, but an injury timeout was called and Caleb Shipman was out of the game for Tulsa CHEF. Zervas scored for the Arrows, and Malone sank a three-pointer at the buzzer to give the Goldbugs a 35-23 lead going into half time.

The Goldbugs really ran up the score in the third period while holding the Arrows to just six points. Tucker scored nine points, including a trey, during the quarter. Malone added eight points that included two three-point shots. Penco and Mathers each had a basket. Drake Wharton made good on a free throw. The Arrows had three baskets with one each from Zervas, Alex Jones and W. Mace. 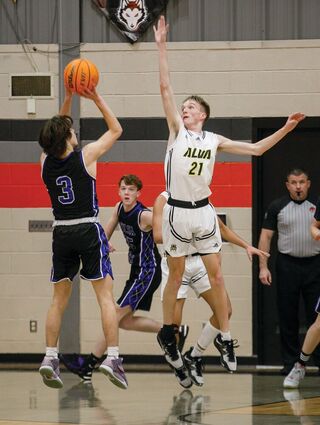 Goldbug Jaxon Jones (21) tries to block the shot from the Tulsa CHEF offense.

In the final period, the Goldbugs scored only ten points with six from Mathers including a trey, a basket and a free throw. Alva's Cambell Gaisford added the other two baskets to finish out the game. With the Goldbug starters on the bench, the Arrows managed 16 points in the last quarter. J. White hit two treys. Tristan Easter sank a trey and two free throws. Zervas added a basket and a free throw. Jones had the other Arrow basket.

With a 14-3 season record, the Goldbugs advance to the championship game of the Pawhuska Tournament, taking on Rejoice Christian in the last game of the night.

Leading the Goldbugs in scoring Friday was Penco with 25 points followed by 15 from Malone. Tucker had 11 points, Mathers nine, Gaisford four, Jones two and Wharton one.

The Tulsa CHEF Arrows were led by Graves with 11 points followed by Zervas with 10. Parham had seven, White six and Easter five. Jones made four points and Mace two.