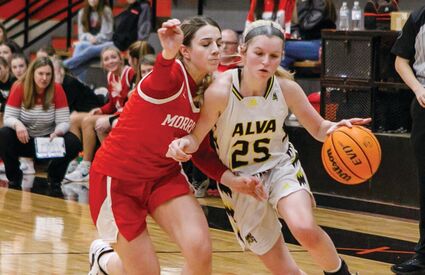 Junior Morgan Heath (25) forces her way around the Morrison defense. The Ladybugs beat Morrison 31-25 Friday afternoon and they move on to the Championship game Saturday evening.

The Alva Ladybugs took on the Morrison Lady Wildcats in the semi-finals of the Pawhuska Tournament Friday. The outcome was up for grabs throughout the game, but the Ladybugs pulled out the 31-25 win using their free throw accuracy in the final quarter.

Alva got off to a smooth start, scoring 10 points while holding the Morrison team to three in the first quarter. In the second period, the Lady Wildcats fought hard, scoring 11 points while Alva managed only one basket. Morrison led 14-12 at halftime.

In the third quarter, the Ladybugs outscored the Lady Wildcats 11-4 to lead 23-18 going into the final period. Morrison managed to reduce the deficit to two points but couldn't regain enough momentum, and the Ladybugs won 31-25.

The Ladybugs were first to score when Morgan Heath rebounded a Lakin Gaddy miss and put it through the hoop. Jaycee Kelln scored on a jump shot and followed with a stick-back on an offensive rebound. Alva led 6-0. Laken Hicks put Morrison's first two points on the board. Carly Argo went in for a jumper. Takyah Burch was fouled and made one of two free throws. Kelln finished out the scoring in the quarter for the 10-3 Alva lead.

Kelln opened scoring in the second quarter on a Gaddy assist, but those were the only Alva points in the period. Morrison went on an 11 point scoring run kicked off by a trey from Rylee Hughes. Burch scored and was fouled but missed the extra point. Madison Buckminister scored on a put-back, and Burch added another bucket. Kallie Rupp finished out the Lady Wildcat scoring with a stick-back, and Morrison led 14-12 at halftime.

The Ladybugs were fierce opening the third quarter, forcing Morrison turnovers. Meanwhile Gaddy scored on two free throws to tie at 14. Hughes committed her third foul and went to the Morrison bench. Argo found three-point range from the right wing, and Alva led 17-14. Buckminister scored a basket to put Morrison within one point of the lead, but Hadlee Ohm widened the gap with two points from an offensive rebound. Then Argo stole the ball and went in for the layup. She was fouled by Hughes who was back on the floor (the fourth for Hughes) but couldn't make the charity shot. Ohm added another two points for Alva on a put-back. Buckminister finished out the quarter with a Lady Wildcat basket. Alva led 23-18 at the end of three quarters. 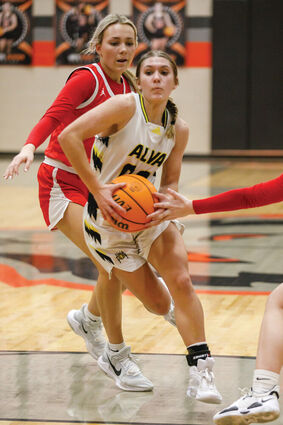 Sophomore Lakin Gaddy (00) zig zags through the Morrison defense to get to the basket during Friday's game at the Pawhuska Tournament.

Hicks led off the fourth period with a basket and was fouled. She made the free throw to pull within two points of Alva's lead. Argo sank a basket, but Morrison's Hally Vaughn answered with two points. From then to the end, Gaddy went to the free throw line four times, making five points, and Heath added another free throw, keeping Alva in the game. Meanwhile Rupp managed one more basket, and Burch failed in two attempts from the charity stripe. Alva won 31-25.

The victory increased the Ladybug record to 14-3, and the Alva team moved into the finals to play Pawhuska for the championship on Saturday night.

The Ladybugs were led in scoring by Argo with nine points followed by Kelln with eight and Gaddy with seven (all on free throws). Ohm had four points and Heath three.

For the Lady Wildcats, Buckminister led with six points followed by Hicks and Burch with five each. Rupp had four points, Hughes three and Vaughn two.