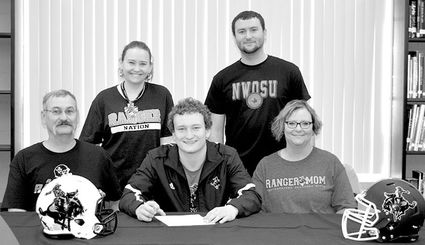 Ethan Harzman signs to play football with the Northwestern Rangers. His parents, Clint and Debbie Harzman, and siblings Kelsey Bryant and Clansy Harzman are also pictured.

Ethan Harzman, a senior at Alva High School, took the next big step in his life and athletic career as he signed to play football as a Northwestern Oklahoma State University Ranger.

Harzman has been a key player for the Alva Goldbug football team for the last four years and has been named Class 2A-1's Defensive End of the Year. Harzman takes pride when he is playing; he strives to make his coaches and family proud of him each and every play.

"In a way I felt relieved because that's where I wanted to go and to get an offer from NWOSU to further my athletic career took a lot of weight off my shoulders," says Harzman.

Alva High School showed their support for Harzman's decision by packing the high school library with family, coaches, teammates and friends. A huge cheer erupted from the crowd when Harzman looked up after signing his name.