Stepping into the future 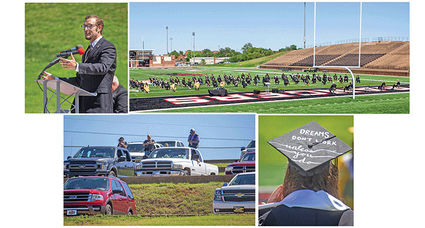 Top Left:Ridge Hughbanks gives a high-energy speech to AHS graduates Sunday afternoon at Ranger Field. A 2016 Alva graduate, he has held national and state FFA offices. Top Right: 2020 Alva High School seniors gather on the Ranger football field for their graduation ceremony Sunday afternoon, May 16. They are facing the school board members, administrators and speaker at the south end zone of the field. Bottom Left: Audience members watch from pickups, cars and SUVs as members of the AHS Class of 2020 receive their diplomas Sunday afternoon. Bottom Right: Wearing good advice on a mortarboard, this AHS senior waits for the Sunday afternoon graduation ceremony to begin.

With graduation gowns and tassels flying in the wind, the Alva High School Class of 2020 gathered Sunday afternoon, May 16, at NWOSU Ranger Field. Seated six feet apart at the south end of the field, the senior class faced the end zone where a podium and chairs were arranged for dignitaries. Facing them were Superintendent Tim Argo, High School Principal Les Potter and school board members Jane McDermott, Karen Koehn, Tiffany Slater, Larry Parker and Shane Hansen.

Family members and friends watched from vehicles arranged in the tiered parking area at the end of the field. They listened to the ceremony on the radio and made themselves heard with honking and loud shouts of congratulations.

The non-traditional ceremony was the culmination of an education that was disrupted and completed online due to the COVID-19 pandemic.

Principal Potter welcomed the graduates and guests before introducing speaker Ridge Hughbanks. Just four years earlier, Hughbanks graduated from Alva High in the traditional location of the school auditorium. The fifth-generation farmer and rancher is the immediate past National FFA central region vice president who has already traveled to 37 states and three countries as well as working alongside legislators on Capitol Hill in Washington, D.C.

Opening with a story of a young dog coming across an old, battle-scarred canine offering advice, Hughbanks said, "That seems to be how commencement speeches go, right? You've got excited young pups, bright-eyed, ready to take on the world, and then some old dog comes up here and tells you what you don't know and how to be successful because it's this mean dog-eat-dog world out there.

"I don't pretend to know any better than any of you all here today," he said. Instead, Hughbanks said he wanted to speak to them as an equal who shared similar experiences at Alva High.

Encouraging the seniors to "look into the magnitude of this moment," he said, "Education is great. Learning is great, but we all understand that learning is a lot more than sitting in a classroom."

He said some of the smartest people he ever met have nothing more than a high school degree. Hughbanks told the seniors that education comes from the experience you have. "Albert Einstein hit the nail on the head when he said that 'Any fool can know, the point is to understand.'"

He also suggested they consider perspective. "You are sitting next to people who see the world completely different than the person in your chair, and that's fantastic." At Alva High you were likely to interact with everyone in your class, he said.

"How many of you would say you're really good at disagreeing with other people? How many like to argue? When we disagree, one of two things happens. You either teach me something new or you reaffirm me in something that I already believed. We have learned how to disagree. The point is to never disrespect," he said. 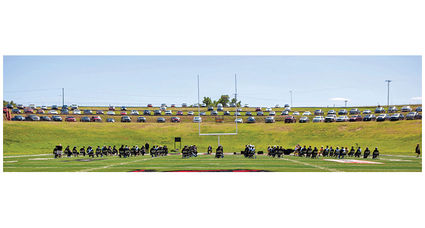 Hughbanks also talked about the Goldbug legacy and the way the community supports the students. "I'm proud to be from Alva, Oklahoma. I'm proud of each and every one of you for being Goldbugs and doing everything that you've accomplished. But understand that it's a lot bigger than just us. It's about this community and building off of the firm foundation that it's established for us," he said.

Payne Louthan and Dawson Manning read off the names of their classmates who walked forward to accept their hard-earned high school diplomas. Holding their mortarboards against the wind, the graduates stepped into their futures as their milestone was heralded by honking and shouts from family members and friends.

A video of the ceremony may be seen at http://www.AlvaReviewCourier.com. The sound is not the best due to wind noise. A large number of photos from the event may also be seen on the website under the More Photos tab.