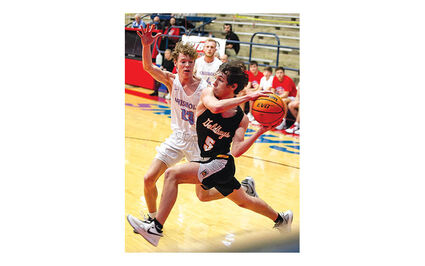 The Alva Goldbugs traveled to Enid for the first round of the Wheat Capital Tournament Thursday afternoon. Alva drew the hosts, the Chisholm Longhorns, for their first round opponent.

The teams were evenly matched going into the contest. Alva had a 4-3 record while Chisholm's was 4-2. They were tied at the end of the first quarter, and Alva led 26-22 at the half. However, Chisholm went on a scoring run to lead at the end of three quarters and eventually won 51-43.

Luke Balenti put the first basket on the board for the Longhorns to open the game. He was fouled on the shot and sank his free throw. The same thing happened again when Hunter Combs scored, was fouled and sank a free throw. Chisholm was now up 6-0.

Kyler Penco put Alva on the scoreboard with back to back baskets, but Combs added another two points for Chisholm. Austin Reed put the Goldbugs within one with a three-pointer. Then Reed sank a deep three, and Alva led 10-8. Parker Warnock scored but was fouled and hit the free throw to turn the lead over to Chisholm at 11-10.

Jackson Feely's shot didn't go in but he was fouled and made one of two free throw attempts for Alva. Combs added two free throws for Chisholm. Goldbug Chuck Shelite got on the scoreboard with a basket to tie the game at 13-13 as the quarter ended.

Combs started second period scoring making one of two free throws. Reed sank a trey and a basket to put Alva up 18-14. Feely added another three-pointer. Chisholm scored but Braden Hofen answered for Alva with a basket. The score was now 23-16 with Alva leading. Warnock hit a Longhorn basket but Feely did him one better with a three-pointer for Alva. Combs added two and Bryson Young scored two for the Longhorns to end the quarter. Alva led 26-22 at halftime.

Reed led the first half Alva scoring with 11 followed by Feely with seven and Penco with four. Hofen and Shelite had two each.

The Longhorns were led by Combs with ten, Warnock with five and Balenti with three. Young and Cody Wichert had two each.

Combs began second half scoring with a Chisholm basket followed by Reed's basket for Alva. Warnock scored two followed by Shelite with two for the Goldbugs. Alva led 30-26.

Balenti scored on a basket followed by a three from Combs to put Chisholm in the lead at 31-30. Wichert was fouled on a three-point shot and made all three of his free throw opportunities while Alva's Jaxon Jones went to the bench after being knocked to the floor. The Longhorns led 34-30.

Heston Daniels stole the ball from Alva and made the layup. Combs went to the free throw line and made both tries. Chisholm now led 38-30. Feely added two free throws for Alva. Shelite was fouled and made one of two chances to end the third period with Chisholm in the lead 38-33.

The Goldbugs made a valiant effort at the start of the final period with Reed making a free throw while Penco and Shelite made baskets. Wichert was fouled in the act of shooting, making both the basket and the free throw. The score was now 43-38. Feely added a free throw for Alva. Hofen fouled out of the game, and Warnock went to the charity stripe where he hit one of two attempts. Combs was next at the line, making both free throws. The score was now 46-39 in Chisholm's favor. 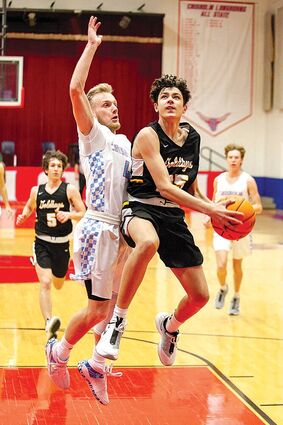 Alva's Kyler Penco catches air as he goes up for the layup against Chisholm's defense. Photo by Desiree Morehead

Penco sank a basket for Alva. Balenti hit one for Chisholm, and Feely put another one in for the Goldbugs. The Longhorns led 48-43. Daniels went to the free throw line and sank both attempts. Combs had two chances from the charity stripe but hit neither. Wickert hit one of two free throws for the Longhorns. That's how the game ended with Chisholm winning 51-43.

Feely and Reed led the Goldbugs scoring with 13 each followed by Penco with eight and Shelite with seven. Hofen had two points.

Combs led the Longhorns with 19 points while Warnock had ten and Wichert had nine. Balenti made seven, Daniels four and Young two.

The Goldbugs will move into the consolation bracket of the Wheat Capital Tournament today (Friday) as they meet the Woodward Boomers at 2 p.m. Woodward lost to the Oklahoma City Knights, a homeschool team, 89-88, on Thursday. Chisholm will play the Knights in the second round of the tournament at 8 p.m.