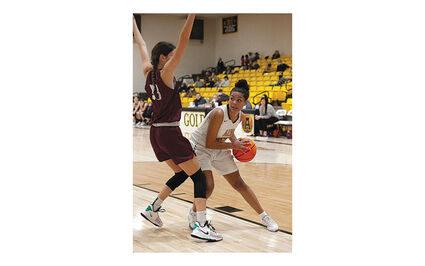 Alva's Rianna Clark looks for help from her teammates with Blackwell's defense blocking her way to the goal.

After winning the championship game in the Oilton tournament, the Alva Ladybugs expected to play Newkirk, Fairview and Perry before the Christmas break. Although the Ladybugs won that championship game 42-41 in overtime against Frontier, they also were exposed to a player who later tested positive for the coronavirus. This put them in quarantine for two weeks, right up to the break.

Coach Dusty Horn had to wait until after Christmas to get the players back on the court. He also scheduled a scrimmage at Canton to help his team get in shape. Fans wondered if the Ladybugs had overcome their long idle time.

Tuesday night, the Ladybugs hosted the 0-5 Blackwell Lady Maroons. Neither team scored much in the first half but the Ladybugs started finding their rhythm and won 37-19.

The game was well into the first quarter with no score for either team. Alva finally put one point on the scoreboard when Brooke Perez made the second of two free throws. Natasha Hindman scored for the Maroons, but Rianna Clark answered to make the score 3-2 for Alva. Tatum Jones added one more basket for Blackwell to put the Lady Maroons on top 4-3 in the low-scoring first quarter.

Ladybug Mason Bogdanovcz opened second quarter scoring, making one of two chances from the free throw line. The score was tied at four all until Jayleen Treviszo hit a Blackwell basket. Another two by Kingsley Goff put the Maroons in the lead 8-4. Morgan Heath went to the free throw stripe, making one of two tries for Alva. Goff added a free throw to keep the margin at four. Jaedyn Williams narrowed that lead with three points from the corner.

Perez and Heath each missed both chances from the free throw line, but Ladybug Cynthia Samaniego sank a basket. She was fouled on the shot and made the free throw. Goff's last second try for a basket failed, and the Ladybugs went into halftime leading 11-9

In the first half of play for Alva, Williams and Samaniego each had three points while Clark had two. Heath, Perez and Bogdanovecz each had one. Goff led Blackwell with three followed by Jones, Treviszo and Hindman with two each.

In the third quarter, Perez added a free throw followed by a Hindman basket to narrow Alva's lead to 12-11. Samaniego scored after a Maroon turnover. Hindman went to the free throw line and missed the first. Although she sank the second, it didn't count due to a lane violation. Samaniego scored the first Alva three-pointer, and then scored again on a basket to put Alva up 19-11.

Hindman made good on two free throws. That was the last time Blackwell scored in the quarter. Williams added a Ladybug basket. Samaniego went to the line and made one of two free throw chances. Perez picked off a Blackwell pass but didn't have time to capitalize on it before the buzzer sounded. Alva led 22-13 at the end of the third. 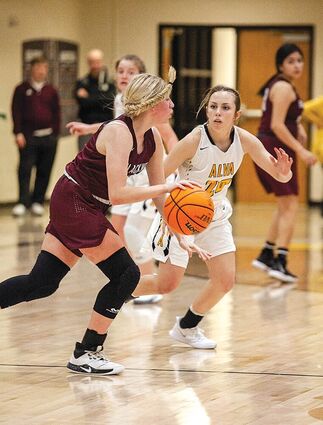 In the fourth quarter, Heath stole the ball and scored. Samaniego hit a basket, and Alva led 26-13. Goff managed one of two free throws, but Williams hit another three-pointer and Bogdanovecz scored to put Alva in front 37-18. Samaniego made another basket for Alva, and Botts made one free throw point for the Maroons before the final buzzer. Alva won 37-19.

The win put the Ladybugs at 5-0 for the season while Blackwell dropped to 0-6. Alva put a lot of pressure on the Lady Maroons who had 32 turnovers.

Goff was the top scorer for Blackwell with eight followed by Hindman with six. Jones and Treviszo made two each while Botts had one.

Both Alva and Blackwell were headed to the Wheat Capital Tournament at Chisholm on Thursday. The Ladybugs were scheduled to play Garber at 12:30 p.m. and Blackwell was to meet Perry at 6:30.