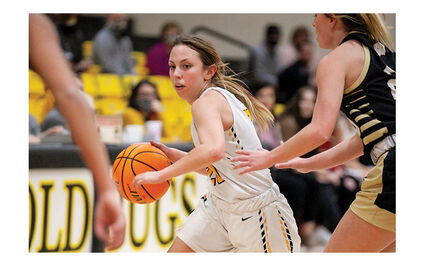 Alva's Jaedyn Williams (20) looks for a hole to get to the basket.

The Alva Ladybugs were handicapped by the loss of four starters in Tuesday’s home game against Woodward. Aimee Chapman was sidelined with a concussion, and Brooke Perez was out with a knee injury. Rianna Clark and Chloe Durkee couldn’t play after possible coronavirus exposure. They were awaiting results of tests. The Ladybugs also lost freshman Triniti Miller to an injury.

The mostly freshman and sophomore players worked hard but couldn’t stand up to the Woodward Lady Boomers, losing 49-26.

In the first quarter, Woodward jumped out to a 9-2 lead, but Alva went on a 7-0 run to catch up and tie the score at 9. The Lady Boomers added one more basket to lead 11-9 at the end of the quarter.

Woodward opened the second period with a 9-0 run before Alva’s Hallie Hamilton scored. The Lady Boomers sank back to back triples to lead 26-13. Mason Bogdanavicz scored on a Hamilton assist. Kloey Marlatt hit one of two free throws for Woodward. Then Hamilton scored on a layup and was fouled. She made the extra point, and Alva was down 27-18. Neither team could get a basket until the final buzzer when Masey Porter scored to put Woodward up 29-18 at the half. Woodward scored 18 to Alva’s 9 in the second quarter.

Woodward widened their lead in the third period, adding 16 points while Alva’s only score was on a Morgan Heath basket. At the end of three periods, Woodward led 45-20.

In the final quarter, Alva did a little better. The Ladybugs scored six points on a three from Cynthia Samaniego, two points from Boganavicz and a free throw from Hamilton. Woodward was held to four points. The final was Woodward 49, Alva 26. 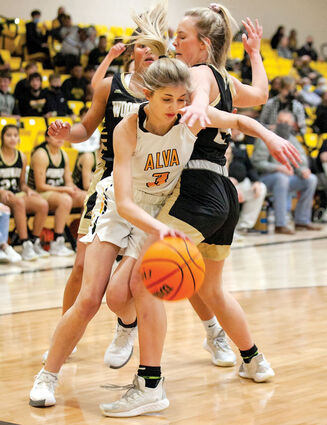 Alva's Mason Bogdanovecz (3) runs the base line to the basket with Woodward defense trying to stop her.

Considering the youth of the Class 3A Alva team, they made a strong showing against the Class 4A Woodward girls.

Sophomore Hamilton led the Alva scoring with eight points followed by Samaniego, also a sophomore, with seven. Morgan Heath and Bogdanavicz had four each while Jaedyn Williams made three points. The Ladybugs made two of three free throws, all by Hamilton.

For Woodward, Porter led with 20 followed by Madison Gantrell with 11. Ava Long had five and Avery Williams three. Jocelyn Treece and Jissele Hagemeier had two each while Caroline Price and Marlatt had one apiece.

The Ladybugs will play again this (Friday) afternoon in the Enid Festival as they take on Morrison at 2:40 p.m