The Lady Rangers fall in battle to Bulldogs 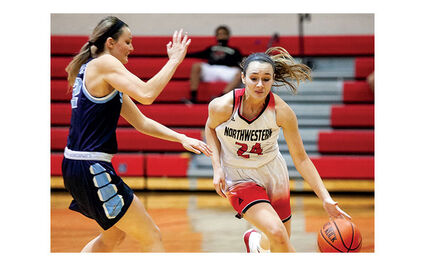 Northwestern's Lizzie Shephard (24) dribbles down court with Southwestern's defense trying to stop her.

Neeley scored 20 points, grabbed six rebounds, stole the ball and tallied four assists. She shot 8-of-14 from inside and 3-of-4 from the free-throw line.

S. Frame finished the contest with 14 points, five rebounds and one steal. She went 6-for-10 from field goal range and 2-for-5 from deep.

Johnson recorded another double-double with 13 points and 15 rebounds. She finished shooting 5-for-7 from down below and 3-of-4 from free throw range. Johnson also blocked two bulldogs.

Walker scored 12 points and grabbed three rebounds. She drained 4-of-7 from outside and 4-of-8 from inside the paint.

Shephard rounds out the scorers in double figures with 10 points, five assists, three rebounds and a block. She finished shooting 4-of-9 from inside and 2-of-5 from three-point range.

Josena Frame grabbed eight rebounds and scored once from underneath. She finished with three assists.

Johnson and Brown opened the game with made free throws. Maddy North fired first for Southwestern with a pull-up jumper. Clark drained a deep three to start the outside shooting stint for the Red-and-Black. S. Frame hit back-to-back three pointers at the two-minute mark to go up by one on the Bulldogs. Neeley rolled in a layup with under a minute left to go followed by another score from S. Frame. The Lady Rangers took the first quarter 23-22.

Taber Beer scored first off of a jumper to open the second period followed by Maddie Sperle with a layup to go up three on Northwestern. J. Frame rolled in a layup off of a fastbreak and Sperle splashed back-to-back three pointers to go up seven until Neeley tossed in a layup that was assisted by Brown. Shephard drained an outside score with five minutes to go in the first half and the Bulldogs answered back with two quick scores. Johnson scored the Lady Rangers last bucket before entering the locker room with SWOSU up 38-34.

Macy Gore stole the ball from the Lady Rangers to open the second half. Makyra Tramble fired first on the scoreboard with an inside score that was assisted by Karly Gore. Shephard hit her second three pointer to cut the SWOSU lead to just three. Kes Reeves drained an outside score followed by Brown to tie the scores once again at the seven-minute mark. The Lady Rangers went up nine points on the Bulldogs after Walker drained back-to-back three pointers with three minutes left to go in the period. Southwestern slowly fought their way back into the lead, the Red-and-Black finished the third quarter behind by two points. (62-60 SWOSU)

Tramble opened the fourth quarter with a quick score from inside. Neeley answered back with a layup that was assisted by J. Frame. Johnson rolled in another sore and J. Frame snagged another assist. S. Frame scored off a layup and Johnson knocked down two free throws to cut into the Bulldogs' six-point lead. Walker splashed another deep three pointer and Regan Crawford of Southwestern rolled in an inside score. Tramble hit a deep score with three minutes left in the game to put Southwestern up by eight. The Lady Rangers recorded quick scores from Neeley, Shephard and Johnson to finish the game behind the Bulldogs 77-87. 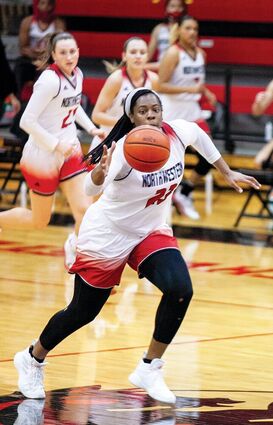 Northwestern's Mya Johnson (23) intercepts the ball from the Southwestern offense.