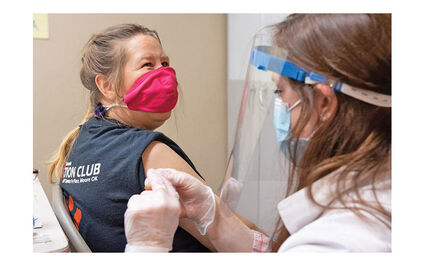 Jennifer Ferguson, a resident at Santa Fe Place in Moore, smiles as a nurse from Walgreens prepares to give her a COVID-19 vaccine. The facility cares for people with intelectual disabilities who live in three buildings on its campus. The facility director said the buildings were being treated as three separate facilities during the vaccine rollout, which created some confusion for staff and residents. Vaccines were administered by the county health department to staff and residents in December. Others, like Ferguson, had to wait several more weeks to receive their vaccine from Walgreens.

Nearly seven weeks after Covid-19 vaccines reached Oklahoma nursing homes, first doses have been delivered to residents and staff at nearly every long-term care facility in the state.

CVS and Walgreens, which are responsible for vaccinating most of the state's facilities, completed their first doses this week with the exception of a few homes that asked to reschedule due to ongoing Covid-19 outbreaks or residents recovering from infections.

Most nursing homes and few assisted living facilities, veteran centers and homes for individuals with intellectual disabilities have already received the second of two doses.

Due to their age and health, these residents are among those most vulnerable to the virus and were supposed to be first in line for the vaccine along with frontline healthcare workers.

Since March, nearly 12,000 residents and staff have contracted Covid-19, according to the state health department's most recent report. And 960 of them have died.

Despite the devastating impact that Covid-19 has had on elderly residents and their caregivers, many workers remain skeptical about the vaccine and have delayed or opted not to be immunized.

The company launched a campaign to fight misinformation, educate staff and diminish fears but many remain leery.

Elderly residents though are anxious to get the vaccine. Green said about 90% of their 900 residents have received at least the first dose. And most who haven't were excluded due to an illness.

"They've seen polio and all those vaccinations that their kids had to get," Green said. "They're military men who had to get shots before fighting in a war and didn't get a choice. Younger people are seeing this for the first time."

In northwest Oklahoma, the owners of Beadles Nursing Home face a similar struggle. All 43 residents at the family-run facility have received their first vaccination and most already have the second booster shot. But about 40% of the 100-person staff has refused the vaccine.

Nursing Director Dayna Jordan, who owns the home with her husband, posted a video to a private Facebook page Thursday encouraging staff to get vaccinated. Jordan, who has received both shots, went to a restaurant last weekend and said in the video that "it was so freeing to not be scared."

Four Beadles Nursing Home residents died from Covid-19 and dozens of staff and residents contracted the virus this winter forcing the home to isolate residents in their rooms for weeks. Now, with masks and social distancing protocols still in place, residents are able to move around and participate in group activities, which has brought life back into the building, Jordan said.

Questions of renewed visitation abound as more residents and staff receive the vaccine. But federal protocols have not been updated since September, leaving residents and their families waiting for news.

In the meantime, many facilities are relying on outdoor visits, conversations through window panes and virtual chats to keep spirits up.

It is unknown how many long-term care staff statewide have refused the vaccine.

Approximately 50,000 doses that were allocated to CVS and Walgreens remain unused, according to data requested by Oklahoma Watch. The state health department was required by the federal government to provide 97,500 doses to the pharmacies for long-term care staff and residents. Those mandates were based on the number of licensed beds, not actual residents, which combined with skepticism from staff has resulted in the unused doses.

Meanwhile, demand for vaccines across the state remains high as the state prepares to start vaccinating teachers later this month.

The state health department can reallocate those doses. Deputy Health Commissioner Keith Reed said the agency is evaluating the stockpile and is being "careful not to take vaccine away prematurely and leave them short."