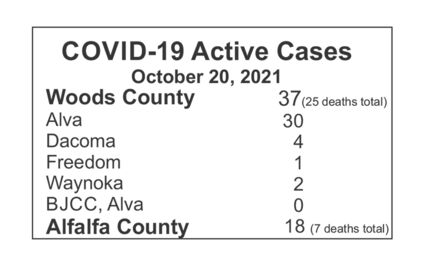 While the number of active Covid-19 cases continues to decrease in the state, some Woods County communities have had increases. The Oklahoma State Department of Health (OSDH) says as of Wednesday, Oct. 20, there were 9,714 active cases in the state. That's down 2,191 from a week ago.

Woods County active cases increased by seven, and now stand at 37. Three additional deaths were posted for the county. Those three added deaths were all from Alva.

Freedom now has one active case compared to none last week. Waynoka has two cases, down two from a week ago. Dacoma is listed with four cases, down one. Alva cases total 30, up nine from last week. Bill Johnson Correctional Center in Alva still reports zero cases, according to the Oklahoma Department of Corrections.

The OSDH reports that 25 people were hospitalized with the flu last week in Oklahoma. One person died of the flu during September.

County health departments, medical facilities and pharmacies have flu vaccinations in stock now. According to news releases by the OSDH, it is safe to receive both the flu shot and the Pfizer Covid-19 booster shot at the same time.