Honoring a grandmother by feeding a multitude 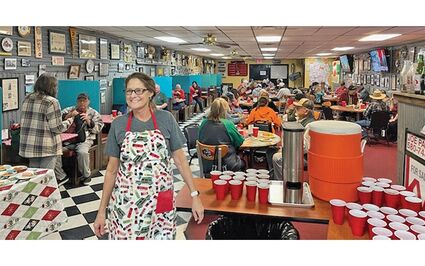 The idea took root a few months ago. The Parsons brothers were talking about Christmas and what it would be like without their grandmother. Merita Parsons passed away in August. As Joe said in a social media post, it would be hard to get in the mood to celebrate.

"My grandma was a great part of my life. Anyone who knew her knows she loved Christmas and loved to do things for others, especially feeding people," Joe wrote. The two young men (Max is 22 and Joe is 19) decided the best way to honor their grandmother was to feed people on Christmas Day.

They brought up the idea to their parents, Don and Terri Parsons of Alva. Thanks to their grandmother's lessons, the brothers already knew how to cook. And they already had a well-stocked kitchen since their family owns the 818 Diner. Don told them the same thing he always says when they want to do something, "I will do anything with you. I will not do it for you."

While the idea continued to grow, nothing much was said about it for weeks. Then the brothers decided to attend the big Thanksgiving dinner at Cherokee put together by Doug Whittet. They observed how everything was organized and asked Whittet questions. They began to get an idea of how many people might attend.

Don said he knew then his sons were serious about the project. He had some concerns about how the two would pull it off. Max and Joe have completely different personalities and different approaches to problem-solving. Working together doesn't always go smoothly. But he was pleased at how they came together for this event.

As Christmas neared, the 818 Diner Facebook page put out the word. There would be a big Christmas dinner, dine in or carryout. People were asked to text an RSVP to Max's cellphone. Soon he had a list of 200 people, then 300. The list kept growing. A local bank sponsored an ad in the Newsgram to spread the word further.

The kitchen was stocked with supplies. On Dec. 24 friends and family gathered to smoke the turkeys and make desserts, working until around 10 p.m. Max returned at 5 a.m. on Christmas Day to start smoking the hams.

By 11 a.m. they were ready. Two food lines were set up to handle the traffic flow. Those dining in went through a serving line to have plates loaded with smoked turkey, smoked ham and side dishes. Drinks were ready for pickup at the end. There always seemed to be enough seating. As one group left and the table was cleared, another group arrived. Reports from those who attended were that the food was delicious and plentiful and the event was efficiently run.

In the kitchen, the second food line was ready to put together carryout meals. Sometimes there were two, sometimes ten, but there were enough willing hands to keep everything flowing smoothly. 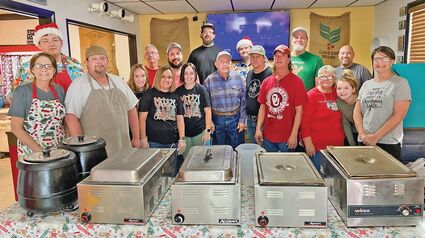 The Parsons brotrhers are shown with their crew of volunteers who helped serve Christmas dinner to around 500 people.

The Parsons tried to count the meals but couldn't keep up with the numbers. They estimate they served around 500 meals in the two hour period from 11 a.m. to 1 p.m. with the last guests arriving right at 1:00. Volunteers included employees of the diner and the Holiday Motel which is also owned by the Parsons. Family members and friends also stepped in to help with about 15 total volunteers.

Donations for the meals were accepted but not required. Everyone was generous and donated enough to pay the food costs. The Parsons brothers are considering how they might use some of the extra funds, perhaps a free hot dog meal for July 4th.

The Parsons family and the 818 Diner were honored with a High 5 on Oklahoma City's Channel 5 TV news for their Christmas dinner. But Don says his sons deserve the bulk of the credit. They came up with the idea, handled all the planning and did a large part of the cooking. It's not something many 22 and 19-year-olds could accomplish.

Now the brothers are making notes about the dinner and how it might be improved. They are already planning for the 2022 Christmas dinner. Grandma Merita would be proud.