Goldbugs lose close one to Hennessey 50-40 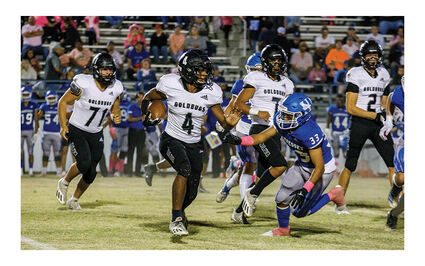 Friday night's Alva Goldbug football game at Hennessey was a series of highs and lows for Alva fans. The Eagles scored first, but Alva tied them early in the second quarter. Hennessey was able to score twice more before halftime to lead 22-8.

The Eagles scored again early in the third period, but the Goldbugs put three consecutive TDs on the board to pull within two points at 28-26 going into the final quarter. On the opening play, Hennessey scored to widen their lead. Both teams added more points, but neither had a big enough margin to relax. In the end, Hennessey won 50-40.

Hennessey's freshman quarterback Titan Hix, son of the head coach Paul Hix, was a huge part of the Eagles' offense, scoring all seven touchdowns. The Goldbugs were plagued by penalties, being assessed 12 compared to six for Hennessey.

Hennessey had first possession of the football and drove steadily down the field. At the Alva seven yard line, Hix kept the ball to gain two yards. On the second down, he was sacked by Aiden Faison, moving the ball back to the 19. After an incomplete pass, Hix was again sacked, this time by Lantz Mathers, and Alva took over.

On the second play, Goldbug quarterback Daylon Malone threw the ball to a wide open Weston Tucker, but the ball was fumbled and the Eagles recovered.

This time, Hennessey was able to score after 13 plays covering 70 yards. From the Alva 11, Hix made four consecutive tries, finally running the final five yards across the goal line. The two-point conversion was good, and the Eagles led 8-0.

Alva's possession lasted only four plays when they had to punt.

Hennessey's next drive ended when Hix was sacked by Reichen Kraft on the fourth down. The Goldbugs managed one play before the quarter ended.

Alva steadily advanced, mainly on carries by Drake Wharton although Mathers made one three-yard gain. At the Hennessey 14, Malone scrambled as he looked for a receiver. He found Tucker in the end zone for the first Goldbug TD of the game. Malone ran the ball in for the two-point conversion, and the score was tied at 8-all.

Starting at their 44, the Eagles moved ahead although several passes were incomplete. At the Alva 28, Hix found a wide open Kevin Trillo for a pass. Trillo was brought down one-yard short of the goal. Hix ran in for the touchdown, but the two-point conversion failed. Hennessey now led 14-8.

The Goldbugs had a bad start on their possession. First they were moved back five yards on a false start. Then Malone was sacked by Zack Tillman, the ball came out, but Alva recovered. On the second down with 26 yards to go, Malone kept the ball for a gain of nine. After an incomplete pass, Phillip Randall had to punt.

The Eagles started on their 26 and immediately made a first down on a pass caught by Weston Smith. Hix ran for another first down. Hennessey continued to move ahead. Then Hix passed to Seth Simunek who caught the 32 yard pass just a yard from the goal. Although Hix fumbled the ball on the next play, the Eagles recovered. Then Hix was able to slip across the line to score. The two-point conversion pass to Smith was good, and the Eagles led 22-8. That score held until halftime.

The Goldbugs started the third with possession of the ball. A nice pass from Malone to Faison was negated by a holding call. Two plays later, Malone was sacked by Jessin Hardin for a loss. Although Wharton ran for 14 yards, the Goldbugs still had 14 to go and had to punt.

The Eagles made good use of this possession, eventually scoring again. After being held short of the goal at the Alva one-yard-line, Hix was able to run in for the touchdown. The snap was fumbled in the extra two-point attempt, but Hennessey now led 28-8.

Following the kickoff, Malone connected with Randall on a pass. Randall found room to run and went the distance to score the touchdown on a 54 yard pass play. The two-point conversion failed, but the gap was narrowed 28-14.

Hennessey's next possession was short-lived. After two incomplete passes, Hix ran for six yards. Then a false start set them back five yards, and they had to punt.

At the Alva 45, Malone gave the ball to Faison who gained two yards. Following an incomplete pass, Wharton found running room for the first down at the Hennessey 44. Malone handed the ball to Mathers who took it all the way for the touchdown, shoving his way through defenders. The two-point conversion failed, but Alva was edging up on the Eagle lead 28-20.

Hennessey went nowhere on their next possession. A pass to Andres Gonazlez was stopped short by Faison. After an incomplete pass, Hix tried again but Drew Glass knocked the ball away, and the Eagles had to punt.

Alva didn't do much better, stalling out with six yards to go. The Goldbugs also had to punt.

At the Alva 11, Malone gave the ball to Wharton who made the first down. Wharton had no gain on the next play, but the Eagles were called for encroachment to advance the Goldbugs by five yards. Malone ran the ball for another first down. At the Alva 32, Malone passed to Glass who was wide open and took the ball in for the touchdown. The two-point conversion failed, but Alva was within two points of the lead at 28-26. That was the score going into the final period.

Starting the third quarter on the Alva 45, Hix elected to keep the ball and ran it in for the touchdown. He also scored the two-point conversion, and Hennessey led 36-26.

Alva couldn't make forward progress on their possession and had to punt.

The Eagles started on their 48 and were soon at the Alva four yard line, mostly on keepers by Hix. He managed to advance for three yards, and another run put Hix across the line for his sixth TD. The extra point kick was good, and Hennessey now led 43-26.

The Goldbugs started at their 29 and steadily advanced. At the 11 yard line, Malone elected to keep the ball and ran it in for a touchdown. The two-point conversion failed. Hennessey now led by 11 at 43-32.

On their next possession, the Eagles were on their 24. A pass from Hix to Tillman gained the first down to the 35. Hennessey gained only one yard in two plays when the Goldbugs were called for a substitution infraction, giving the Eagles five yards. Then Hix broke loose on a 58 yard run to the goal line. The extra point kick was good, and Hennessey led 50-32.

With time running out, Alva was under pressure to score. The Goldbugs made it from the Alva 40 to the Hennessey 45 on a run by Wharton. But Malone was sacked by multiple Eagles for a loss of seven. Wharton broke loose on a big 32 yard run to take Alva to the Hennessey 20. From there Malone passed to Randall at the five yard line, and he made it in for the touchdown. Malone took the ball in for the two-point conversion. With a couple of minutes left in the game, the score was Hennessey 50, Alva 40.

Hennessey took the ball at their 49, and advanced to the Alva 43 as time ran out and they took a knee.

With the loss, Alva is now 3-5 on the season and 2-3 in district play. The Goldbugs will host Oklahoma Christian School next Friday for Senior Night with a 7 p.m. kickoff. After that, they have only one more game at Perry left in the regular season.

In other District 2A-1 games, Newkirk defeated Perry 40-19 in a Thursday game, Chisholm shutout Blackwell 7-0 and Millwood topped Oklahoma Christian 40-13. 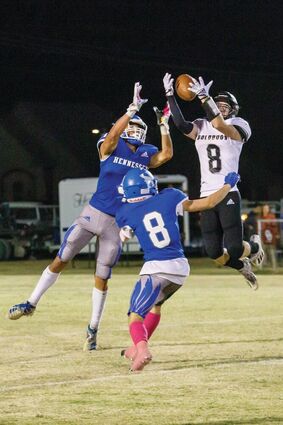 Alva's Drew Glass (8) out-leaps the Eagles' defense to try and catch the ball.