When pregnancy is a crisis, there's hope

• NW Oklahoma pregnancy center to open in Alva in Spring '23 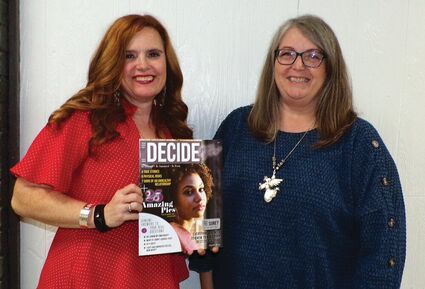 Hope Pregnancy Center-Northwest Oklahoma Director Charity Lyon (left) holds up a copy of "Decide" magazine. She and state director Gayla White (right) are working to open the center in Alva, which will serve the entire Northwest Oklahoma region. Photo by Kathleen Lourde

You're in college. You want to be an architect; you're very talented and can't wait to start an exciting career once you finish your five to seven years of education. You've dated a few times, gone to a few parties with other architecture students, but your focus is architecture, not romance.

And yet. You did go home with one guy and maybe things shouldn't have gone as far as they did, but you're not planning on seeing the guy again, and you just try to put it out of your mind.

Until you start noticing uncomfortable, unprecedented changes in your body. Oh, no. Surely not. PREGNANT?

Holy smoke, what are you going to do?

In Oklahoma, abortion is illegal. You could try going to another state. You could try some crazy online method "guaranteed" to cause a miscarriage (and potentially damage your health in the process). You could research the "abortion pill" (RU486) but that is also illegal in Oklahoma. Even the "morning-after pill" (Plan B One-Step) is illegal in this state.

Maybe abortion never crosses your mind because your religious beliefs prevent even considering it.

But one thing's pretty sure: between the hormonal changes and the shock to your plans for your future, chances are you'll be feeling quite emotional.

Charity Lyon, director of Hope Pregnancy Center – Northwest Oklahoma (427 Barnes Ave., Suite 4, in the Downtown Mall, thinkimpregnant.org), hopes you will not make a decision based on emotion, but rather pause, breathe, and head over to the Downtown Mall to talk it over with them. The center plans to open in the spring.

Hope Pregnancy Ministries is a program of Oklahoma Baptist Homes for Children, which has several children's campuses around the state. Its state director, Gayla White (based in Oklahoma City), and Lyon, director of the Alva-based center, sat down with the Review-Courier to describe the range of services they can provide women (and their families) dealing with a crisis pregnancy.

People tend to think of crisis pregnancies as a teenage problem, but that's not the case.

"Twenty percent of the women we see are married," said White. "Anyone can have a crisis pregnancy. Age doesn't matter, socioeconomic background doesn't matter; anyone can have a crisis pregnancy. Maybe the couple is in college and they want to go to grad school and they can't see how a baby can work into that. Or it could be Mom thinks she's going through the change and it turns out to be a pregnancy – that could be a crisis." And a teen's pregnancy can throw the whole family into crisis.

By law, when a minor is pregnant she can make the decision herself; the center is not required to tell her parents.

"We do not break her confidentiality," said Lyon, "but what we do is we strongly encourage her to talk to her parents, and we'll even work with her and give her tools that teach her how to do that. We encourage her to invite them here so they can learn what our services are." A crisis pregnancy for a teenager is a crisis for the teen's parents, too, said Lyon. "We are happy to serve the whole family."

However, while most people think that crisis pregnancies are teen pregnancies, in reality less than 25 percent are teens. Typically, they are college age, whether or not they are actually college students. People aged 18-30 make up 65 percent of their clientele, said White.

What Happens in a Pregnancy Center?

"We meet them where they are," said Lyon. "We just say, 'Why are you here today, and how can we help you?' The medical services we provide are pregnancy testing and ultrasound, and that can confirm and date their pregnancy." Those are the only medical services offered; if someone comes in who doesn't have a doctor, Lyon will give them a referral list to help them find one.

"Typically, people who are struggling with a pregnancy decision, they're reacting to emotion or pressure, and they are worried about circumstances – usually temporary circumstances that will change," said White. "And when they have a safe place and a safe person to talk with and they can lay it all out on the table – I don't know about you, but when I am struggling with something that's really heavy and I have someone to talk to, just hearing myself say it all kind of puts it in perspective. So we provide that safe space where they can just get it all out."

Well, they do much more than that. But the first step is to confirm that the person is indeed pregnant. After that, those who are pregnant receive information on their three main options: abortion, adoption and parenting.

"We have a tool called the decision guide we share with our clients," White said. "It allows them to list the options they are considering and then write out the pros and cons they think of for each option." The process helps them shift from feeling to thinking, so they can see things a little more clearly, she added.

Information on each option is offered.

"We provide education on all their options: on parenting, on adoption and on abortion," said White. "Abortion is not currently legal in Oklahoma, but we know they can still go out of state. It's important for women and men to know what their options are and what the abortion procedures are, because it's not as easy as pulling a tooth, like sometimes they think."

"As Oklahoma Baptist Homes for Children, we definitely hope that people will decide against abortion, but it is their decision," said White. "We empower them with accurate information to make an informed decision. They're the only ones who will have to live with their decision. We're here to provide what they need to make a decision, and then to support them afterwards," she said.

"No one needs to have an abortion if they haven't had their pregnancy verified and confirmed by an ultrasound," she said. "Ten to 25 percent of pregnancies naturally end in miscarriage, and an ultrasound can show if they have a viable pregnancy. It can also show how far along they are. Those are very important questions that need to be answered before someone can make a pregnancy decision."

Some readers may remember how adoptions were handled decades ago – pregnant girls were often sent out of the area so they wouldn't shame their families; and when they gave birth, the babies were taken from them even if they'd changed their minds – at least, that's how the movies portray it.

The center only refers people to nonprofit local adoption agencies, said Lyon. "That way, no one gains financially if they make an adoption decision. And even if they go all the way through the adoption process, they can still change their minds. It's still their decision. Until the baby is born and they go before the judge who is going to ask them, 'Has anyone pressured you to make this decision?' they do not relinquish their parental rights. Adoption is very different than people think. We just want them to know the truth about adoption and remove the fear of it if that's an option they want to explore."

For people who have come to the center to have their pregnancy confirmed, the center has a program called Empowered Parenting. Participants can come once a week during their pregnancy to learn, for example, what to expect during pregnancy, labor, delivery, breastfeeding, and bonding with a newborn.

After the baby's born, they can come every other week for one year and continue to learn how to take care of a baby, about baby milestones, safety, how to know when to call the doctor, how to take a baby's temperature, and so much more.

Each time a participant comes to a class, they earn points to redeem for baby items.

"They can earn everything they need to take care of their child," said White. "So if they're considering abortion because of finances and they apply for SoonerCare for health care and they can earn all the baby items, that removes that financial burden so they have the freedom to take another look at their decision."

While that program is mostly open only to those who had their pregnancies confirmed by the center, exceptions are made, especially for teens.

"We make an exception for teens and walk them all the way through the program, regardless of whether they came to us for medical services," Lyon said.

How It Will Work

Once the center opens its doors in spring of 2023, it will be open 22 hours a week. If the need is greater, then the hours will be expanded, said White.

"Typically the first visit is just a pregnancy test," said White. "Often they suspect or learn that they're pregnant at three to four weeks." The ultrasound is usually done on a second visit, because the pregnancy needs to be five weeks and five days along before the ultrasound can really pick it up. "Before that, it's just too tiny," said White.

"When they come back, we answer all their questions and see how else we can help them," said Lyon. "And if they are choosing to parent or place for adoption – even those still in the decision-making process – they can sit in on the parenting classes or classes on what to expect during labor and delivery," she said.

"One person who went through all the parenting classes, but then decided to place her child in adoption, was able to use her 'Baby Bucks' to find a very special gift to send with her child," said Lyon. "We also have classes for people who have chosen adoption and the emotions they'll experience, and what to expect."

"And the adoption agencies we refer to provide ongoing lifetime support for them, including counseling," said White. "If they find they are struggling again 15 years down the road that is still available for them."

Hope Pregnancy Center-Northwest Oklahoma is hiring for two positions: an RN to oversee all medical operations and perform ultrasounds, and an administrative assistant who will also be the volunteer coordinator, said Lyon. "We do need volunteers, both male and female," she said, adding that the volunteers will be highly trained.

People interested in getting involved with the center should either call Hope Pregnancy Center – Northwest Oklahoma at 580-327-9091, go online to obhc.org and click on the employment page to read the job descriptions and download an application, or submit a resume and references to [email protected]