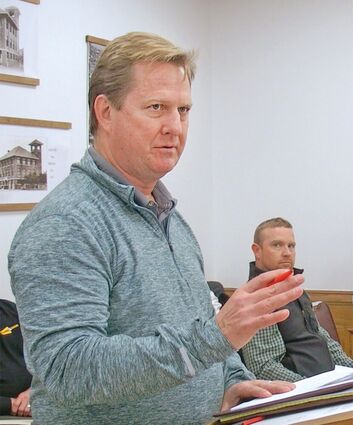 Todd Lafferty, co-CEO of Wheeler Brothers, talks to the Alva City Council about city land his company wants to purchase.

Due to an omission, the Alva City Council discussed a do-over of a contract with Wheeler Brothers Grain Company. During a lengthy discussion Tuesday night, a motion deemed to be poorly worded was defeated by a 0-8 vote. Eventually the councilmembers crafted a motion that did pass so a contract can be prepared for a vote at a later meeting.

The city owns property adjacent to the Wheeler Brothers location in Alva. At one point, the city gave the land to the Rock Island Railroad for a right of way. With the property no longer being used by the railroad, it reverted back to the city many years ago.

Todd Lafferty, co-CEO of Wheeler Brothers, brought handouts picturing City of Alva land adjacent to their property that they would like to purchase. The contract approved earlier was for a triangular section of land; however, Wheeler Brothers also wanted another strip of land that was needed for their planned expansion. They would like to tear down a flat, used to dump grain from trucks, and replace it with a grain bin. Lafferty said he wasn't sure if the land was theirs or the city's but he wanted to make sure of ownership before doing any work.

Mayor Kelly Parker told the council the fair market value appraisal for the first tract of land (.57 acre) was $3,000. The city also had to do two surveys, one for the original land area and a second for the additional strip. These surveys cost $2,625. He said the council needed to take action outlining terms of a new contract for the entire area.

Parker said he regards this as an economic development opportunity for Alva, and he reminded councilmembers that Wheeler Brothers has been maintaining and mowing the property for many years.

City Attorney Drew Cunningham said the additional area should be appraised. Jay Lohmann, manager of the Alva Wheeler Brothers, said they've been working on this since August of 2021.

Councilmember Randy Stelling made a motion to prepare a sale agreement to Wheeler Brothers for $3,000 plus the survey costs. Sadie Bier seconded.

Cunningham insisted the city legally needs to find the fair market value of the additional property before signing a contract.

Daniel Winters suggested the wording could be fair market value plus the survey costs.

Then there was a question about how much area was included. Parker looked up the surveys but he said the second one appears to include part of the Wheeler Brothers property. He said the survey will have to be amended, and an appraisal will be required.

With a motion and second already on record, the council had to vote. Everyone voted no, including those who made and seconded the motion.

There was more discussion about how to word a motion. Councilmembers also talked about recognizing the years of property maintenance Wheeler Brothers had contributed.

A cooperative effort by Parker and Winters with approval from Cunningham provided suitable wording. Several agreed that maintenance by Wheeler Brothers and survey costs could be considered equal. Parker said it probably came out favorable to Alva. And Flattery said whatever the council determined as alright with Wheeler Brothers.

Eventually Winters made a motion for the city attorney to prepare a sale contract for the fair market value as determined by a real estate professional. Stelling seconded the motion. The motion passed with seven yes votes and Troy Brooks abstaining. In the discussion of the earlier contract approved by the city, Brooks said he believed the property should be offered for public bidding.