Goldbugs split the day during the Alva Festival 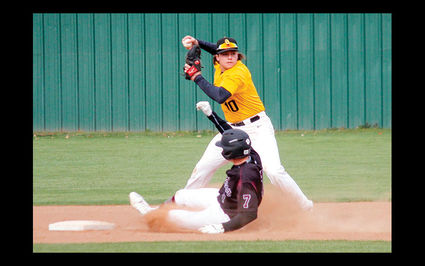 Second baseman Stanton Earnest (10) catches the throw from third base to get the force out at second and throws the runner out at first for the double play.

The Alva High School baseball team hosted Perry and Pioneer on Monday afternoon for their annual Alva Festival as the Goldbugs suited up against the Perry Maroons in their first game of the day.

Rafferty Brown had a successful day on the mound in Game One, pitching all five innings for a shutout victory over the Maroons that concluded in a run-rule for the Goldbugs.

Alva had a decent showing at the plate, collecting five hits over Perry's one with Zeth Warren leading the Goldbugs at bat.

Though the first inning went by scoreless, Alva was first on the board in the bottom of the sec...