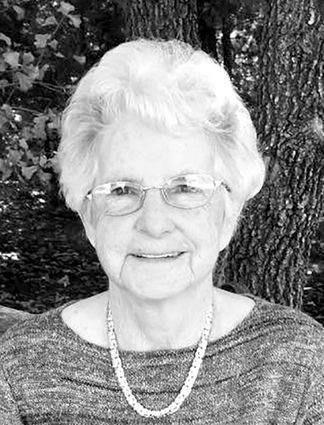 The Lord called our sweet angel home on June 6, 2017. Dolly Marie (Ferrell) Daniels left this earth peacefully at home, surrounded by those who love her. Dolly was given the gift of life and she enjoyed it to the fullest.

Dolly was the ninth child of ten born to Leon and Maude Marie (Winans) Ferrell on January 19, 1935, at home in northern Alfalfa County. She grew up in the Driftwood, Oklahoma, area. She enjoyed telling everyone that she had nine siblings, naming them in order – seven brothers (Bobby, Billy, Jimmy, Tommy, Teddy, Henry and Benny) and two sisters (Pauline and Rosalie). Friends and family heard this often as her disease progressed, but it was received with a smile every time due to understanding what dear memories she treasured as she grew up with them all. She graduated in 1952 from Byron-Driftwood High School, where she excelled in cheerleading and basketball. She always bragged of her high point ballgames at 5 foot tall and challenged each one of her children and grandchildren to break her record. She was also the Alfalfa County tennis champion and salutatorian of her graduating class. After graduating she attended Enid Business College in Enid, Oklahoma.

In 1955 she married the love of her life, Bill Daniels, in Driftwood, and they made their home in Cherokee, Oklahoma, where she began working for Alfalfa Electric. During her working years, she was also employed by Guarantee Abstract and Alfalfa County Bank, where she worked for 20 years as a cashier and bookkeeper, retiring from there in 1990 to enjoy her grandchildren. She always considered her greatest career to be raising her four girls.

She was a member of the Friends Church of Cherokee. During her early years she enjoyed being a member of several bowling leagues in Cherokee. She and Bill had many, many laughs enjoying time with their card club friends. She was thrilled by being honored with one of the Cherokee, Oklahoma, Mother of the Year awards in May of 1986. Later her greatest enjoyment was attending all activities of her children, grandchildren and great-grandchildren were a part of. If you would have asked her what her two most treasured things in life were, undoubtedly it would have been the hugs and kisses from her sweet Bill and the joy of rocking each of her babies.

Dolly was celebrated for her loving spirit, as well as her warmth, sensitivity, generosity and love of her family. It was the simple things in life that she never took for granted. She leaves this time on earth blessed, knowing that heaven awaits, and she will spend eternity with her Lord Jesus Christ and be reunited with the man she loved dearly.

Celebration of her life was held at Friends Church in Cherokee, Oklahoma, at 2 p.m. on Friday, June 9, 2017, with Pastor Joe Woods officiating. Burial followed at Cherokee Municipal Cemetery with arrangements by Lanman Funeral Home, Inc. of Cherokee. Online condolences may be made at http://www.lanmanmemorials.com.

Memorials may be given to the Friends Church or Hospice Circle of Love through the funeral home.