Goldbugs blow by the Yellowjackets 34-20 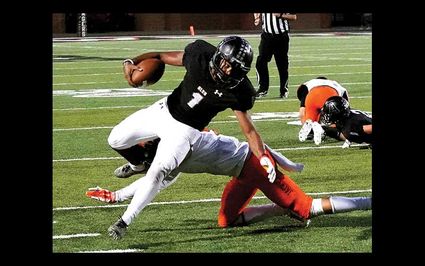 Alva's Davion Murrow (1) is up-ended near the west sideline as he picks up yards for the Goldbugs in their victory over Fairview Friday night.

The Alva Goldbugs came out slow while Fairview scored twice in the first quarter Friday night, but the home team turned it around to dominate the rest of the game. The 34-20 victory puts the Goldbugs at 4-0 for the season.

Head Coach Taylor Schwerdtfeger said the Goldbugs were pretty healthy going into the game although a few had been out with sickness during the week. Homecoming festivities provided another distraction Friday.

From the viewpoint of Alva fans, the first quarter was just plain ugly. The Goldbugs were a bit slow getting into defensivey position, and Fairvie...