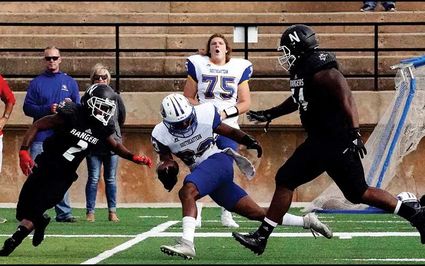 Jarrett Ingraham (23), SEOSU running back, is brought down by Ranger De'Shawn Gordon (2) and Jonas Costillo (54) near the Southeastern sideline during the Rangers' homecoming game.

The Rangers were once again dominant on the ground game where they took it to the Savage Storm for 269 yards, led by junior running back Anthony Cota, who carried the rock for 117 yards and two scores. Cota was followed up by Isaiah Weed who rushed for 73 total yards and also threw for 174 on the day.

The defense had a rocky start, but really picked up play in the second and were led by sophomore linebacker Maurice Wright...