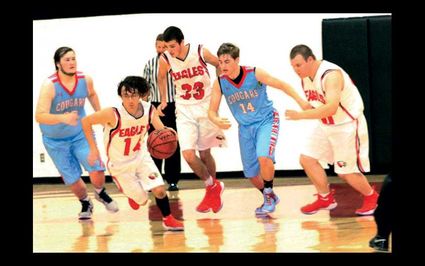 Freedom Eagle Cameron Denham, 14, leads the fast break down court during the game against Aline-Cleo. Freedom boys lost 56-33. Other players following are Eagle players Nate Wood (33) and Will Jessup (50). The Cougar players were 25 and 14.

In the first home game of the basketball season both Freedom teams fell short of a win.

Freedom Lady Eagles fall four points short as Aline-Cleo held on for a 40-36 win. The game was back and forth with the biggest lead being 6 for Aline-Cleo and 5 for Freedom. Defense was what kept Freedom in the game as they got 22 steals and forced 34 turnovers. Aline-Cleo held on with good free-throw shooting, making 18 free throws.