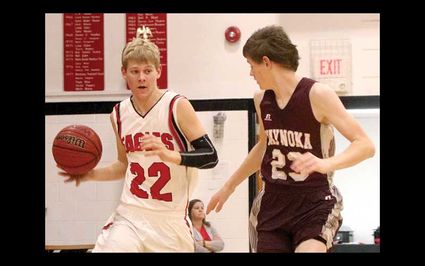 Myles Nixon (22) brings the ball up court with Garrison George (23) in the second half on Friday at Freedom High School. The Eagles fell to the Waynoka Railroaders in the game, 67-24. Nixon had two points for the Eagles against Waynoka, and netted eight points versus Burlington on Tuesday.

FREEDOM – Kristopher Fargo broke out for 25 points Tuesday night at Burlington in a 72-49 loss for the Freedom boys. The loss to the Elks followed a loss on Friday night when the Eagles ran into a buzz saw as they lost to Waynoka, 67-24.

Freedom dropped its record to 5-11 on the season. The Eagles look to get back on track this weekend as they take part in the 56th Annual Buffalo Invitational Tournament.

The opening round matchup for the Eagles will be against Fargo-Gage/Ft. Supply on Thursday afternoon. Depending on the outcome of the opener, the Eagles will take on Aline-Cleo or Beaver...