Bugs hold off Crossings in overtime 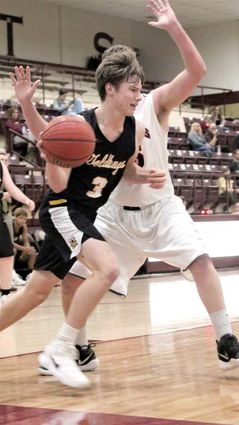 T.W. Beiswanger (3) drives the baseline just before kicking the ball out to an open man in the corner. Beiswanger finished the contest with a career high 17 points, including several big baskets late as the Bugs took down Crossings Christian in overtime, 57-55.

CASHION, Okla. – The Alva boys came out victorious against a very tough Crossings Christian team on Thursday as the Goldbugs defeated Crossings in overtime, 57-55, to open the Cashion County Line Tournament. The Bugs take part in the tournament semifinals Friday at 5:40 p.m. in Cashion.

Alva improves to 11-3 overall this season and earned its first overtime win since it defeated Chisholm at home on Jan. 29, 2016. Crossings entered Thursday's matchup ranked No. 15 in 2A, giving the Bugs their second victory against a ranked opponent this season.

The game featured very similar teams both in...