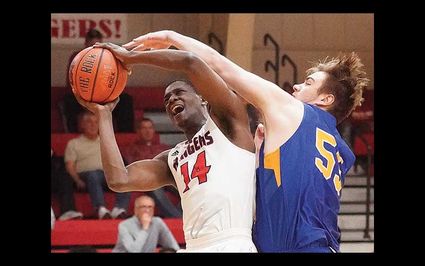 Ranger Trey Johnson (14) is fouled as he goes up for a shot against Southeastern's Ryan Scott-McGuire in Thursday's game.

ALVA, Okla. - Northwestern Oklahoma State men's basketball dropped their first home game of the 2017-18 season Thursday evening, losing 75-73 to Southeastern Oklahoma State inside a packed Percefull Fieldhouse. Despite a strong defensive effort that produced 10 blocked shots (including four from Treyvon Andres) and five steals, the Rangers couldn't stop the duo of A'Torey Everett and Kevin Buckingham who went for 21 points each.

After a Jett Jobe jumper with 4.6 seconds left in the ball game gave the Storm a two-point lead, Cody Halvorson had the chance to play hero once again but his highl...