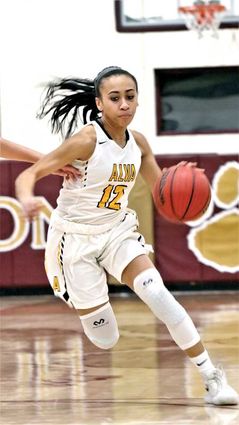 Ray Ray Bell (12) drives to the hole down the left side of the lane in Alva Ladybug action against Oklahoma Christian School on Thursday. Bell finished the play with a layup, helping the Ladybugs to a 74-58 win in the Cashion County Line Tournament opener.

CASHION, Okla. – Career high scoring from Payton Jones and Stephanie Spellman led the Alva Ladybugs to a Cashion County Line Tournament opening win over Oklahoma Christian School on Thursday, 74-58. The Ladybugs will play 2A No. 3 Dale in the tournament semifinals at 4:30 p.m.

The win improved Alva's record to 9-5 this season and snapped a three-game losing streak. The 74 points scored the Ladybugs was the highest scoring total for a Ladybug team since they dropped 94 points against Afton in a 2A Regional game on Feb. 26, 2015.

The Ladybugs had things going from the outside all game long,...