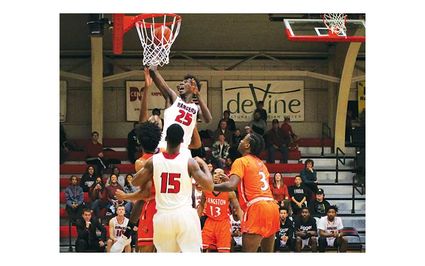 ALVA, Okla. – Northwestern Oklahoma State men's basketball hosted Langston University (3-0) Tuesday night in exhibition action as the Rangers took to the hardwood at home for the first time this season. The Lions won 70-63 in a game that saw 17 lead changes, but Ranger head coach Shawn Dirden used the opportunity to get 13 different players into live-game action.

Northwestern's offense was led by a trio of Bryshon Bryant, A.J. Jones and John Godwin who each notched 12 points. Six-foot-eight center Treyvon Andres recorded a double-double – the Colorado native had 11 points and pulled down 14 rebounds.

After shooting 46 percent in the first period and taking a three-point lead into the break, the Rangers came out cold in the second half going just 11-of-36 for a 30 percent clip. Northwestern didn't have its best night at the charity stripe as they shot 42 percent from the line (8-for-19).

The Ranger defense stood strong for most of the night, holding Langston to 34 percent from the field and 21 percent shooting from beyond-the-arc. The Red and Black also had eight steals on the evening including three from Jones and two from Andres.

The two teams were tied with under four minutes to play, but Northwestern went 0-for-6 from the field over a three-minute span allowing the Lions to build a four-point edge. Langston shooters hit their free throws in the final minute, handing Northwestern a 70-63 loss in the exhibition game.

Northwestern will return to regular season action next Friday and Saturday when they hit the road for two non-conference games in Denver, Colorado. The Rangers will face-off against Regis University Nov. 23 before heading to Metropolitan State University of Denver Nov. 24.

Fans can find coverage of both games at riderangersride.com or tune in to the Pulse 105.7 FM in Alva.