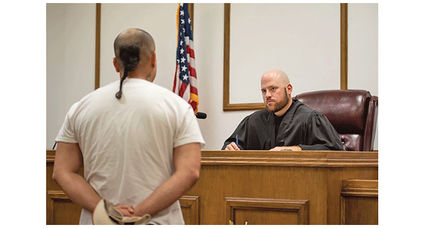 Seminole County Associate District Judge Brett Butner talked to a defendant during a domestic violence review on Sept. 27, 2019. Court hearings are suspended for now until May because of the coronavirus pandemic.

Family violence is escalating in parts of the state as the stress of the pandemic mounts.

Weeks of isolation, financial strain and fear are heightening tensions, and some agencies say they have seen the effects.

Law enforcement officials and victim advocates in Oklahoma City and Tulsa say domestic violence has increased since city leaders began urging residents to stay home in an effort to mitigate the spread of the novel coronavirus. More violence is expected as the isolation continues, they say.

In March, the Oklahoma City Police Department received 3,129 calls related to domestic violence, up 11% from March 2019. April is already worse. From April 1 through 8, the department received 859 domestic, a 15% increase over the same period last year.

The Tulsa Police Department reported 1,779 calls in March, up 4%. Lt. Clay Asbill, who heads the department's family violence unit, declined to provide additional data, saying his staff is "too busy."

Kim Garrett, chief executive officer of Palomar, Oklahoma City's family justice center, said families are cooped up at home together without breaks from each other, which increases tension and can lead to violence.

The justice center, which houses advocates and staff from area service providers, is communicating with most clients using online chats and text messages. It also launched a pick-up and delivery service this week to provide food, hygiene products and other basic needs to clients. One woman picked up pet food because her abuser would not let her buy it at the store.

Advocates say abusers are taking advantage of the pandemic by telling victims that shelters and services are closed or threatening a victim with arrest if they leave their home during a shelter-in-place order, even to get help. Neither is true.

Shelters across Oklahoma remain open and are taking precautions to protect residents, such as asking about COVID-19 symptoms before they are admitted, staggering meal times to create social distancing and asking residents to shelter in place.

Lyall said two residents who reported symptoms typical of COVID-19 were moved to a hotel to avoid infecting other residents or staff.

The COVID-19 spread caused statewide school closures in mid-March, which led to fewer reports of child abuse and neglect, according to the state Department of Human Services.

Department spokeswoman Casey White said most reports of abuse and neglect come from teachers. But most teachers aren't able to check up on their students now, which is a concern, she said.

Many child-care facilities have also closed, and with more families staying home in compliance with local guidelines, abuse and neglect are more difficult to detect.

Reports of abuse dropped by nearly half from March 1 to April 6, according to the human services department, which operates a hotline. But the reports coming in are more severe.

Garrett, of Palomar, said reports of child strangulation are up.

White said many recent reports are "of a higher priority," meaning there's an imminent risk to the child and a caseworker is sent to check the same day. White said some of the calls include allegations of domestic violence and concerns about lack of supervision.

Things are quiet in Woodward. Too quiet, according to Kristi Hill, a victim advocate at Northwest Domestic Crisis Services.

Hill said domestic violence calls are slightly up for a few months now, the likely result of oil field layoffs that added financial strain to families. She is bracing for more.

May is usually a busy time because victims with children wait until school is out to move, and tax refunds provide the cash some need to escape their abuser, Hill said. But schools closed unexpectedly last month, leaving little time for victims to plan. The extended tax filing deadlines mean a longer wait for refunds.

Many victims leave while their batterer is at work. But with many working from home or without jobs because of the pandemic, victims are likely feeling stuck, Hill said.

"Victims are cut off from the outside even more than usual," Hill said. "They might have church families or friends who could have helped them get out and they're not doing that right now."

The nonprofit's shelters in Woodward and Guymon remain open, and advocates are answering calls from home in hopes of getting victims out of abusive homes, but it hasn't been easy, she said.

Everything is moving a little slower right now in an effort to keep everyone safe, she said. "But we're still here and we're going to do what we can."