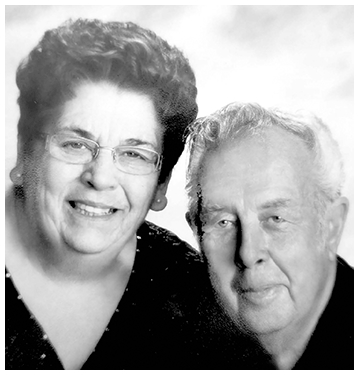 Graveside services for Thomas and Nyla Scott, ages 85 and 77, of Chambers will be held at 11 a.m. Friday, June 19, 2020, at the Chambers Cemetery in Chambers, Nebraska, with military rites provided by the Chambers American Legion Post 320. Rev. Mike Durre will officiate. Visitation will be from 5 to 7 p.m. Thursday, June 18, 2020, at Biglin's Mortuary in O'Neill, Nebraska.

Tom and Nyla passed away on Sunday, June 14, 2020, near Osborne, Kansas, due to injuries sustained in a car accident. Memorials may be directed to the family for future designation. Biglin's Mortuary is in charge of arrangements.

Thomas Fredrick Scott was born on February, 17, 1935, near Chambers, Nebraska, to Harry and Irene (DeHart) Scott. He attended country school through the eighth grade. He worked on the family farm for a couple years before enlisting in the U.S. Air Force. He enjoyed being stationed in Greece before he was honorably discharged on May 1, 1958. Tom then returned to Chambers, Nebraska, and worked for Bayne Grubb and the Miller Seed Company. Through the seed company, he met a harvester, Don Zahorsky, and enjoyed that part of the business. Soon, Tom bought his first combine for $2,500 and started his own company. While working in Oklahoma, Tom stopped into a drive-in diner for supper one night, where his car hop was named Nyla Mitts.

Nyla June Mitts was born on May 4, 1943, in Hardtner, Kansas, to Charles and Zella (Sanders) Mitts. In 1961, she graduated from Alva High School in Alva, Oklahoma. After graduating, she took a job at a drive-in diner where one night she had a customer named Tom Scott.

Tom enjoyed working, going for walks, and visiting with his friends. Nyla enjoyed reading, crocheting, and cooking for her family. She especially enjoyed making elaborate birthday cakes for her grandchildren. They both truly enjoyed spending time with their family, especially their grandchildren.