Will it be safe at the polls? 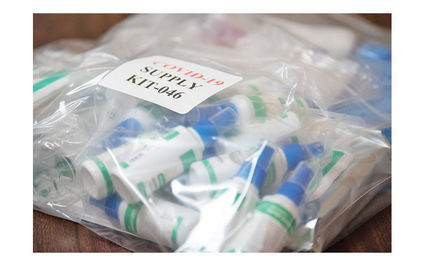 Each polling station in Oklahoma County will receive a COVID-19 supply kit that contains hand sanitizer, masks, gloves and wipes. The county is requiring its precinct workers to wear masks and practice social distancing during the primary election.

The reopening of Oklahoma's economy has brought thousands of people back into stores and workplaces, many of whom are choosing not to wear face masks or bother with social distancing.

A question on the minds of election officials is whether a similar scenario will play out when thousands of voters head for the polls for the primary election, raising the risk of spreading the deadly coronavirus. Early voting starts June 25 with Election Day on June 30.

Although the state election board is strongly encouraging poll workers and voters to wear masks and keep at least six feet of distance from others, there is no state or local requirement that voters comply. There is also no state requirement that local precinct workers use its recommended safety protocols for in-person voting.

However, many county election officials will likely require their precinct workers to wear protective gear, maintain distance from each other and voters, and practice other safety measures.

Some counties also plan to monitor behavior of voters standing in line and, if necessary, politely suggest they move farther apart. Some precincts will offer hand sanitizer to voters, but won't be handing out or requiring face masks.

The uncertainty over COVID-19 risks has Oklahoma election boards grappling with how to safely deliver a basic right of democracy. Many poll workers are retired and older – a demographic more vulnerable to the disease – and many workers who happily signed up in past years are refusing to participate this year for fear of catching the virus.

"We're putting the plea out in every way we can."

"Just having to open the polls, it's not going to be under the best of circumstances, but we'll get it done one way or another," Sanderson said.

In Pottawatomie County, which also saw a drop in poll workers, Election Board Secretary Jeannie Stover said workers who declined were concerned either about their own health or bringing the virus home to their families.

The Tulsa County Election Board has partnered with the county to allow employees, such as county clerks and park officials, to work the precincts. The average age of the county's usual precinct worker is 75, said Gwen Freeman, Tulsa County Election Board secretary. The election board is searching for young people who are less immunocompromised to work the polls. It is looking for workers using social media, interviews and civic organizations.

"We're putting the plea out in every way we can," Freeman said.

In the meantime, a larger number of voters have requested absentee ballots, wanting to avoid the polls.

Stover said in Pottawatomie County so far this year, more than 2,200 absentee ballots have been sent out, compared with a total of 488 in 2016, which was also a presidential election year.

The state election board has developed safety protocols with the University of Oklahoma Health Sciences Center aimed at mitigating the risk that COVID-19 poses to precinct officials and voters.

• Voters should stand six feet from the poll workers' table to limit direct contact. Voting booths should be six feet apart, if there's enough space. If not, voters should to be directed to use every other booth.

• Poll workers should be at least six feet apart and six feet from voting machines, if possible. The voting equipment should be wiped down with alcohol wipes before and after the machines are started.

• Workers should wash their hands or use sanitizer throughout the day and avoid contact with voters as much as possible. The state election board said it provided masks and strongly recommends poll workers wear them. It also provided eye protection and gloves.

• Voters should wear masks and should be encouraged to stay six feet from each other.

The state's guidelines, however, are just that - guidelines. While counties and voters may choose to follow safety precautions, they don't have to.

Oklahoma County plans to follow the state's guidelines. The county election board has received personal protective equipment and will have social distancing precautions in place.

Sanderson, the county's election board secretary, said he hopes voters follow the procedures, but there is really no way to enforce them. Precinct officials and especially voters can make their own choices.

"It would be difficult for us to require that of voters. I mean that's their option," Sanderson said. "We can't (require), we're not requiring, that they wear masks or any other protective gear."

Pottawatomie County also plans to adhere to state recommendations. But Stover, its election board secretary, said the county will bring in an external person to remind people to follow the distancing guidelines.

'The People Around Us'

Despite risks for older poll workers, many still plan to show up and help handle documents, verify voters' identities, provide ballots and perform other tasks. Election officials said they hope voters keep the safety of these critical workers in mind when they come to the polls.

"They are a big part of our community. We couldn't do elections without them," said Tommy Neal, Tulsa County election support and security specialist. "I would love to see the voters taking care, doing their part and making sure that the safety of everybody is preserved."

The concerns for poll workers and voters is heightened by a recent spike in coronavirus cases, which hit new records for daily counts several times since June 12, according to Oklahoma State Department of Health data. On Thursday, June 18, the daily count of confirmed cases soared to a record 450 new cases; the closely watched seven-day rolling average hit a record 247.

"So we've reopened the economy and we've let people go out to restaurants and other things. But what people forgot was the virus is still out there. Nothing about the virus has changed," he said.

Bratzler urged voters to be mindful of poll workers' health and said safety precautions come down to common courtesy. "We're doing these things to protect the people around us," he said.

Neal suggested that Tulsa County voters be prepared to vote by looking over their ballots ahead of time, which will help mitigate any delays caused by the additional precautions put in place.

Election officials said voting this year is going to look different, and as precincts adapt to the pandemic, voters must be responsible for their own safety and that of others.

"It's going to be sort of a perfect storm this election," Sanderson said.