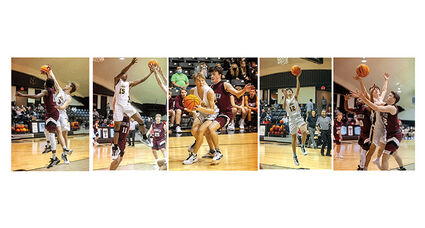 Left to Right: Alva's Donald Blalock (3) tries to stop Pioneer's Marcellus Owens (10) from getting the rebound; Alva's Braden Hofen (15) springs up to get the rebound; Alva's Jaxon Jones (21) tries to push through Pioneer's Cal Dennett defense; Alva's Kyler Penco (12) goes up for a layup during the game against Pioneer in Helena Friday evening; Alva's Austin Reed (13) goes up against Pioneer's Marcellus Owens (10) and Kolby Vestal (32) for the rebound.

In an unusual Friday afternoon game, the Alva Goldbugs traveled to Timberlake High School in Helena to take on the Pioneer-Pleasant Vale Mustangs. The contest came about due to some basketball teams being in quarantine.

It was the first basketball game of the season for the Mustangs who were delayed by football playoffs. Alva came into the game with a 2-3 record after losing to Oklahoma Christian Academy Thursday night. Although Pioneer led by one point at halftime, the Goldbugs rallied in the third period and won the game 58-42.

The Alva Ladybugs had to quarantine after being exposed to C...