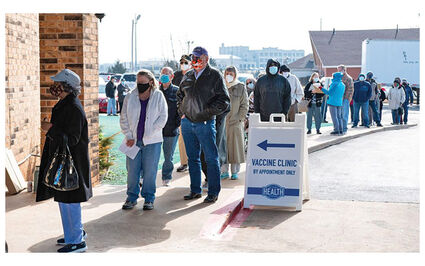 The state Department of Health provided 97,500 doses to CVS and Walgreens, who were contracted by the federal government to vaccinate vulnerable residents and workers at nursing homes, assisted living facilities, veteran centers and other long-term care facilities.

Barely one-third of those doses have been administered, according to federal data. The rest remain in freezers. And residents, workers, family members and state officials are in the dark about which facilities have received the vaccine and who's next.

Beyond the long-term care residents and workers still waiting, Oklahomans age 65 and older are hoping to nab an appointment at a vaccination clinic, even if it means driving for hours. Teachers, who were moved up in the state's priority populations after many spoke out on social media about the need to get back into the classroom, could still be weeks away from their first dose.

The state has access to a federal database that compiles information from the two companies. Oklahoma Watch reviewed the federal data, which was outdated, unclear and inaccurate.

Deputy Health Commissioner Keith Reed said the unreliable federal database provides little insight into when and where vaccines are being administered. Information about who has received vaccines from the pharmacies is not reflected in the state's immunization information system because of a technical error, Reed said. State officials are working with the companies to fix the glitch and eventually transfer the records into the state system.

Reed said the state health department is pausing new allocations of the vaccine to the companies until they can close the gap between the doses in storage and the administered doses.

"We need to get those vaccines out of freezers and into arms," Reed said.

Operation Warp Speed, the federal government's effort to produce and deliver Covid-19 vaccines, required Oklahoma to provide the doses to the pharmacies for long-term care facilities. Allotments are based on the number of licensed beds in each facility. Since many Oklahoma facilities have vacancies and are short staffed, doses often outnumber the staff and residents.

Residents and staff who refuse to be vaccinated contribute to the backlog, Reed said.

It is unclear if CVS and Walgreens will need all doses they were provided from the state's stock and how leftovers would be used.

"We are working with states and jurisdictions to determine how they would like to re-allocate those vaccines, which may include expanding vaccinations to additional prioritized individuals in our stores or returning the vaccine to the state to administer according to their needs," a Walgreens spokeswoman said in an email.

The state is no longer required to provide doses to the pharmacies, though Reed said it will do so if the companies lack the supply to complete the vaccinations. Instead, the state will direct the extra doses toward its community vaccine effort, which is currently targeting residents 65 and older.

Oklahoma's vaccine rollout has been more successful than most states in its early stages. It ranked seventh in the nation with 9.5% of the adult population having received their first dose of the vaccine, according to a Tuesday report from the Centers for Disease Control and Health and Human Services.

CVS has administered more than 10,000 doses at Oklahoma's long-term care facilities, according to data posted on its website, which does not include a list of facilities.

Walgreens has administered more than 25,000 doses in Oklahoma, according to an email from a company spokeswoman.

It is unclear where Oklahoma ranks in vaccinating long-term care residents and workers. The Centers for Disease Control is tracking the number of doses by state on its website. Oklahoma's numbers are lower than what the companies reported to Oklahoma Watch this week. The site does not include vaccination rates by long-term care population making it difficult to compare states.

West Virginia has consistently ranked among the states with the highest rates of vaccination and is the only state that opted out of the federal pharmacy program. On Dec. 30, West Virginia became the first state to complete round one of the two-shot series in nursing homes by partnering with local pharmacies.

Oklahoma health officials have been critical of the slow vaccine rollout by CVS and Walgreens. Earlier this month, Reed led an effort to retrieve 2,500 doses allocated to the pharmacies. Those doses were distributed at six state-run veteran centers that had not received the first shot and were subject to significant Covid-19 outbreaks last year.

About 175 of Oklahoma's long-term care facilities opted out of the pharmacy program, which leaves the state responsible for those vaccinations. Reed said the state completed the first round of vaccinations at those facilities in two weeks.

CVS is responsible for vaccinating 176 facilities in Oklahoma. More than four weeks after the vaccinations began, 46 of those facilities have not received their first dose, according to CVS's website.

The company expects to have all first doses completed by Tuesday, a CVS spokeswoman said in an email.

Walgreens refused to say how many of the 326 facilities enrolled in its program have received their first dose.

Reed said Walgreens committed to administering first doses at all facilities by Feb. 4. The company refused to confirm its commitment or say whether it was on track to meet that goal.

Still frustrated with the lack of communication, Reed said he is pleased with the companies' recent efforts to speed up the process.

Three vaccination days will be held at each of the state's 650 long-term care facilities. The vaccination series requires two shots to be administered at least three weeks apart. And a third clinic will capture residents and workers who were unable to attend the earlier clinics or delayed getting vaccinated to evaluate how others responded.

Late last year, state health officials told long-term care providers that they did not have control over when specific facilities would be vaccinated, but they hoped that all three vaccination days would be completed at every facility by the first quarter of 2021.

If CVS and Walgreens meet their goals to complete first doses next week, Reed said the state will be back on track.