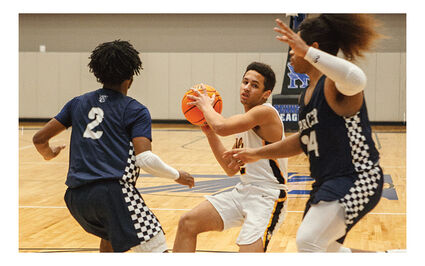 Alva's Daylon Malone (2) tries to make it through Star Spencer's Ashton Yazzie (2) and T'Shawn Wheeler (23) to get down court.

The Alva Goldbugs put forth a true team effort Friday afternoon, taking on the eighth ranked Star-Spencer Bobcats. The area tournament game was played in Hennessey's new facility, and plenty of Alva fans made the trip to cheer for the Goldbugs.

Three Goldbugs contributed double-digit scoring, and those who didn't get on the scoreboard had some valuable plays on the floor. The Goldbugs trailed 33-24 at halftime but out-scored the Bobcats 14 to 9 the third quarter, Alva gained the lead in the final quarter to win 55-51.

Alva pulled out to an early lead with jump shots by Chuck Shelite and Kyler Penco. Star-Spencer tied the score with baskets from Thaddeus Johnson and Ahmad Kennedy then pulled ahead with two-points from Cecil Jackson. Leading 6-4, the Bobcats widened their lead with a couple of free throws from Nickimen Watson who was fouled in the act of shooting.

Penco sank a deep three-pointer to bring the Goldbugs back within one. Watson scored for the Bobcats and was fouled. He sank the third point, and Star-Spencer was up 11-7. The Goldbugs regained a one-point edge with a trey from Austin Reed and two points from Jaxon Jones. Bobcat James Reed was fouled, making one of two from the free throw line to tie the score at 12 with just a couple of minutes remaining in the quarter.

In the remaining time, the Goldbugs pulled ahead with a trey by A. Reed and a Jackson Feely basket to lead 17-12 for the first period.

As the second quarter opened, Goldbug Braden Hofen blocked a Bobcat shot, but Kennedy took to the outside for a wing left three. A. Reed was fouled and sank both shots to widen the Alva lead. Successive baskets by Watson and Johnson tied the score at 19. Watson's basket didn't go in, but he rebounded for the stick-back and the Bobcats took the lead 21-19.

Hofen was fouled on his basket attempt and made one of the two shots. Star-Spencer increased their lead with baskets from Johnson and Ashton Yazzie. The Bobcats now led 26-20. Feely scored two for Alva, but Watson hit another basket, was fouled and sank the third point.

Feely scored two points for Alva but earned his third foul fighting for the rebound. Watson went to the line and made one of the two free throws. The Bobcats now led 30-24. J. Reed hit a Star-Spencer basket, was fouled and made the free throw. That's the way the first half ended with Star-Spencer leading 33-24.

The Goldbugs opened the second half with a seven-point scoring run on a trey by Penco and baskets from Feely and Shelite while the Bobcats scored just once. Star-Spencer called a timeout to regroup with the Bobcat lead narrowed to 35-31. Johnson missed a basket but scored on a put-back. Shelite sank a deep right three, and Kennedy added a trey for the Bobcats. Star-Spencer led 40-34.

Minutes passed in a defensive duel and a scoring drought for both teams. A. Reed and Penco broke the stand-off with Alva baskets to pull within two. Watson increased the Bobcat advantage with a basket. Star-Spencer led 42-38 at the end of three.

After some turnovers and a shot blocked by Hofen, Jackson was able to make a basket. Penco and Hofen attempted shots that didn't go in. Then A. Reed buried a three to pull within two at 46-44. After a Jackson air-ball, A. Reed scored again for Alva, was fouled and sank that shot to put Alva up 47-46.

Watson put the Bobcats back on top at 49-47 with a basket and free throw after. A. Reed stole a Bobcat pass. Feely who was back in the game hit two baskets in a row to tie the score at 49.

Fighting for a rebound, Feely was called for his fifth foul to put him out of the game. Watson sank both of his free throws to give Star-Spencer the lead with just under two minutes left in the game. Penco went in for a layup and then hit another basket to put Alva on top 53-51. 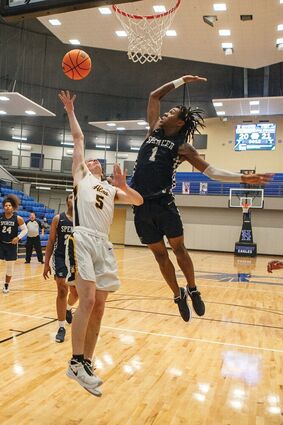 Goldbug Kaden Slater was fouled but didn't score from the charity stripe. Jackson tried for a three that didn't go in, and Star-Spencer called a timeout to talk strategy. Kennedy stepped on the line for a turnover on the inbound pass. The Bobcats fouled Slater who went to the line and sank both shots to put Alva up 55-51, sealing the Alva victory.

Alva had three players scoring in double figures. A. Reed led with 16 points followed by Penco with 14 and Feely with 10. Shelite had seven, Hofen four (along with 10 rebounds), Jones two and Slater two.

Watson led the Star-Spencer scoring with 20 followed by Johnson with 10 and Kennedy with eight. Jackson and J. Reed had four each while Yazzie had 3.

The Alva Goldbugs advance to the finals of the area tournament while Star-Spencer ends their season. Friday night, Crossings Christian beat Metro Christian 61-37 with the winner going to on to the state quarter-finals. The Goldbugs were to play Metro Christian Saturday night to determine which team advanced to state.