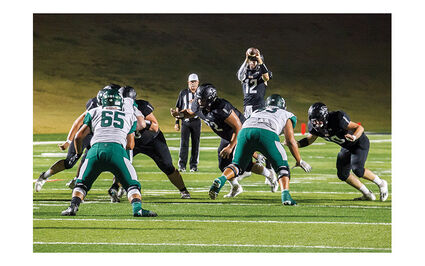 Weather was the deciding factor in the Alva vs Thomas-Fay-Custer football game Friday night. Rain began about an hour before the 7 p.m. kickoff at Ranger Field in Alva. Rainfall became heavier, but it wasn't the rain that determined if the game would be played. It was the lightning.

Game rules state at least 30 minutes must have elapsed since the last lightning strike within a ten mile radius of the playing field. The teams stayed in their locker rooms until about 8:45 p.m. They appeared for a shortened pre-game warm-up, and just after 9 p.m. Thomas won the coin toss. The Terriers deferred, and play began.

Ryden Luper's kickoff was short and went out of bounds to put Alva on their 43 yard line. Alva senior quarterback Kaden Slater handed the ball to Drake Wharton who gained only a yard. Slater attempted a pass but it was incomplete. The third down also resulted in an incomplete, and the Goldbugs punted the ball away.

Thomas lined up at center field on the 50 yard line. Jacobe Edwards started with a quarterback keeper, gaining six yards before Sylus Graves brought him down. On the second play, the Terriers' protection broke down, and Hunter Miller sacked Edwards for a loss of eight yards. On the third down with 12 yards to go, Edwards tried a pass that went over the receiver's head. It was time for Thomas to punt. Luper's kick was blocked by Alva's Drew Glass who then fell on the ball.

The Goldbugs elected to try for the two-point conversion. Malone took the snap and ran for the score. Alva now led 8-0.

Lantz Mathers kicked off, and the Terriers began on their 29 yard line. Owen Baldwin stepped in as quarterback, keeping the ball and making a first down. Baldwin then handed off to Jett Thomsen, but Alva was called on a facemask penalty. This advanced Thomas to the Alva 44.

Edwards returned as the signal caller, handing the football to Baldwin who rushed for five yards. Edwards handed off to Baldwin again; he found running room and made it to the 31 before Miller took him down.

Edwards elected to keep the ball but gained only one yard. On the next play, Edwards gave the ball to Baldwin who broke a tackle and ran for 28 yards. He was stopped just two yards short of the goal line. Edwards then ran the ball in for the touchdown. Luper's kick was good, and Alva led by only one at 8-7.

Luper's short kickoff went out of bounds before going ten yards, earning the Terriers a five-yard penalty. The ball was moved back to the 35, and Luper was preparing to kick again. However, a Thomas coach began talking to a referee. 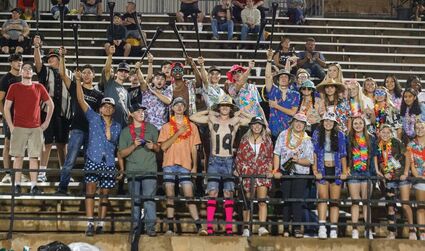 Alva hosted the first game of the season Friday night against Thomas. Goldbug students came with plenty of school spirit.

It turned out there had been a lightning strike within seven miles of Alva that caught the attention of the Thomas coaching staff. Eventually, the teams left the field for their locker rooms, and the public address announcer told fans the game was over. It was time to go home. Although rescheduling the game was discussed, no date could be worked out.

The game goes down as an 8-7 win for the Alva Goldbugs.

Next Friday, Sept. 10, the Goldbugs will again be at home as they take on the Fairview Yellowjackets. It's teacher appreciation night in Alva.