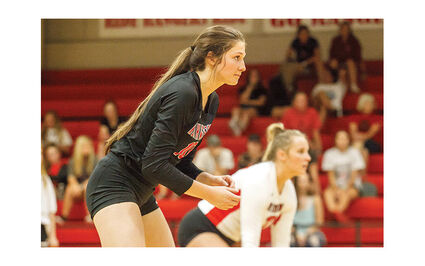 ALVA, Okla. – The Northwestern Oklahoma State volleyball team played their home opener on Tuesday evening after nine straight road matches to start the year. The Savage Storm closed out a 3-2 match victory over the Rangers.

In the opening set, the Rangers and Savage Storm tied at four following a kill by Ravyn Burns. This kill would start a 5-0 run for the Red-and-Black to gain control of the set as the Rangers took an 8-4 lead following a Russell kill.

With Northwestern leading 12-7 over the Storm, the Rangers went on another run, this time an 8-0 run. The run was started by a Honeycutt kill followed by multiple Braylee Stute serves, leading to Southeastern attack errors.

A kill by Honeycutt pushed the Rangers lead to 20-7 over Southeastern. Following a point by the visitors, the Rangers closed out Set 1 on five straight points finished off by a Honeycutt kill to give Northwestern a 25-8 set one victory.

After the Rangers took the set, Southeastern responded by opening the second set on a 4-0 run and five of the first six points overall to open a 5-1 lead. A small run started by a Russell kill helped the Rangers score four of the next five to bring the deficit down to one.

The Savage Storm held a 12-9 lead before scoring the next four points to build their lead to seven. The Red-and-Black responded with the next three straight to bring it down to four, but that would be as close as the Rangers would be able to get in Set 2. The Savage Storm closed out the set with a 25-18 victory to even the match at one apiece.

The Rangers jumped out to a 3-2 lead before Southeastern responded with a five to nothing run to push their first lead of the set to 7-3. Northwestern used a couple of three to nothing runs to climb back and keep the set close following back-to-back service aces from Davis.

Northwestern brought the deficit back down to five before Southeastern went on a four-to-nothing run to open a 24-15 lead over the Rangers before closing the set out with a 25-16 win to take a 2-1 match lead.

The fourth set of the Tuesday night match was solid as both teams tried to jump out fast, trading point for point as three straight kills by Honeycutt helped the Rangers and the Storm be even at six through the first 12 points.

Southeastern used a small run with three consecutive points to attempt to steal the momentum and the set. However, as the Savage Storm opened a 19-14 lead over the Rangers, a Madison Dehlinger kill changed the story of Set 4. The Dehlinger kill started a 6-0 run for the Rangers that included a service ace throughout the run to give the Rangers their first lead of the set at 20-19 since leading 6-5. 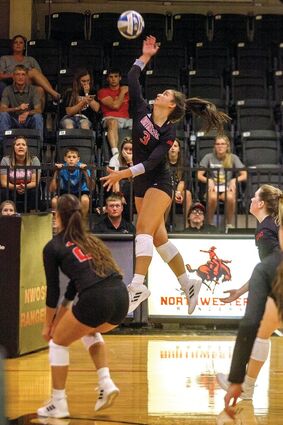 Southeastern tied and even took the lead at 21-20, but with the Rangers trailing 22-21, the Red-and-Black went off four the last four points of the set to win 25-22 following four straight kills by Wimmer. Northwestern came back to win Set 4 to force a final fifth set.

After the comeback Set 4 win for the Rangers, Southeastern opened a 6-2 lead in the final decisive set following a kill from Afflerbach.

Dehlinger stopped the run for the moment, but a 3-0 run for the visitors built an 11-5 lead over Northwestern. Rangers kept the deficit at six a few times from a Wimmer kill, but the Savage Storm closed out the match with a 15-9 set victory giving the Storm a 3-2 match win over Northwestern.

The Red-and-Black will return to action on Sunday, Sept. 19, traveling to Fort Hays State for a 2 p.m. match, before returning to conference play on Sept. 21 against Southern Nazarene. The Rangers will be back in the Percefull Fieldhouse on Sept. 24 against Oklahoma Baptist.